Mediation in a Changing Climate: From Consensus to Confrontation

John  gave the opening address earlier this year at the 2019 International Mediation Symposium, in Salzburg. He shares his presentation with us.

I’d like to start with some provocation. Imagine these alternatives to the usual headlines: 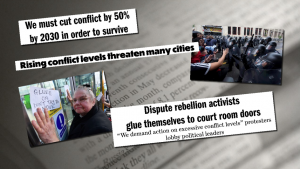 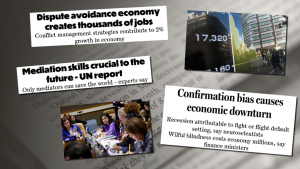 Why not? Are these not just as valid as the usual headlines?

Travelling recently in Alaska and Alberta, we came face to face with the challenge we face. Cruising in Glacier Bay National Park surveying the staggering Margerie Glacier, our onboard nature guide told us that temperatures in Alaska had increased by 4 degrees in a generation, glaciers were receding and the permafrost was melting. Just a few days later as we departed from Alberta, our view on take off was curtailed by thick smoke for hundreds of miles, caused by uncontrollable wild fires. Each of these events is caused by climate change. The irony was not lost on us: we were of course contributing by being there. It was an uncomfortable cognitive dissonance.

All of this is yet further tangible evidence that we face a crisis. That crisis represents an existential threat to our existence as a species. It feels strange to say this so publicly. It has always seemed so distant, so unreal. I have been in partial denial I suppose and I still am. We probably all are. But even in recent weeks, around the world, as the evidence mounts, and protests increase, many of us have come to accept that we face a climate emergency. It is now something we have to face directly in our lives.

At the same time, we are witnessing another degradation of our environment, this time of our political environment – throughout much at least of the western world. I write this as Britain’s planned exit from the European Union threatens to tear the country apart. Brexit has exposed the inability of the traditional process of parliamentary politics in the UK to address the increasingly complex issues of the 21st century, not least because my country, Scotland, presently an integral part of the UK, wishes to remain in the EU.

A process built on debate and division, on adversarial argument and binary voting on most issues, and founded on a party-political system which relies on positional and often parochial views, seems no longer suited to the complexities of the modern era. Around the world, there is increasing populism and confrontation as many people seek to express their frustration and alienation. Traditional norms have been departed from and some very unpleasant polarisation is emerging. Separateness and differentiation from others we don’t like or feel uncomfortable with is becoming an increasingly acceptable trend, coupled with violence of language and apparent loss of decency and self-control.

This also all feels quite tangible. It’s as if we’ve been collectively seized by Daniel Kahneman’s System 1 (see his book, Thinking, Fast and Slow). I am struck by these words of Tim Hicks, from his excellent book, Embodied Conflict,

which could provide another of our alternative headlines:

“It’s interesting to think about the violence we see in the world, whether at the level of interpersonal relationships, or at the societal and global levels, as a public health issue.” That further headline could read: “Relationship Violence is a Public Health Issue.”

We seem to have gone from, or to be going from, consensus to confrontation. Who would have thought that, nearly 30 years after the Berlin Wall came down, the Soviet Union collapsed, Fukuyama wrote The End of History and Fisher and Ury’s Getting to Yes was published, we would be regressing as we seem to be. The climate is changing in more ways than one.

In World Without Borders by Lester R Brown, published in 1973, the author dedicates his book to “a world order in which conflict and competition among nations will be replaced with cooperation and a sense of community.” The reviews featured on the back cover say that Brown “persuasively argues…that the day of the militaristic-nation state is over, and that a unified global society is the only hope for survival.” and offers “convincing evidence that the ‘One World’ concept may be much closer to realisation than we are aware..”. How far away that seems now.

If one adds rapid and widespread technological innovation, not least AI, eco-system and species breakdown, mass migration and other growing international tensions, making up what is known as the VUCA world (Volatile, Uncertain, Complex and Ambiguous), we have to ask if the conventional paradigm for political decision-making and policy-making is fit for purpose?

To that question, we can add traditional ways of problem solving more generally. So, we might ask: what lessons can be learned from the world of dispute resolution and from our work as mediators?

I believe mediators may hold, at least in part, a way to help to rebalance things, to move us back to the necessary state of collaboration without which our future as a species seems to be at great risk. There is no room for positional bargaining any more when it comes to the environmental risks. We’re all in it together and an interest-based approach seems to be the only way to deal with it, not just a nice to have.

Martin Nowak, in his excellent book, Super Cooperators, reminds us

that this fits with the prevailing evolutionary theme of cooperation. It’s not about survival of the fittest, but the flourishing of the collaborative.

We know that adversarialism is costly. Whether in our justice systems, the way we handle disputes generally, national politics or international diplomacy, we must find ways to move away from binary, right/wrong, right/left, win/lose, in/out, yes/no decision making. Zero sum negotiation isn’t fit for purpose. We need a more enlightened, expansive, constructive, creative way to sort out our difficulties. This applies to prevention and reduction as well as to resolution. We need, in the jargon, to find durable, efficient, least damaging methods to reduce and resolve the effects of differences between people, groups and nations.

Tim Hicks’ excellent analysis of the latest research into neuro science describes what may be the missing piece in all of this, not least in helping us better to understand what happens to us and in our brains in situations of conflict – and what we might do about it. I think it also provides us with clues as to why those whose experience lies in mediation may be reluctant to put themselves forward, and why such attempts may be rebuffed. Risk aversion, inertia, fear of loss, resistance to change – all the familiar biases and blockers come into play.

However, I argue that our need to discover, or rediscover, consensual ways of handling difficult issues is, in this century, a matter of species survival. Unless we are able to really listen to each other, understand the deep underlying issues, explore the real needs and interests of people and of the planet, identify and develop creative options, use objective criteria to assess them, and help each other to make innovative decisions, our very futures are at risk.

What I have just described are of course classic attributes of effective mediation. Mediators have the knowledge and experience to offer a constructive way of doing things. We have a calling to help people to find resolution of the most intractable of disputes. We do it week in, week out. My thesis is that this calling needs to be extended and offered at the highest levels now, in the biggest issues, in a really significant way. We can and must use our mediation skills, and all we understand in that connection, to do what we can to help manage and resolve wider global issues, such as the impact of climate change and the polarisation of and within politics. 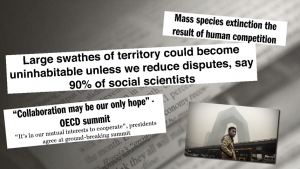 A number of mediators are already engaged in policy and political work. How can that be extended? We must continue to refine what we already do to better help people to resolve their own local and individual disputes, in a sustainable and environmentally friendly way, in the broadest sense of that term. Mediation offers just that, a sustainable and environmentally friendly way to deal with disagreement.

To refine this argument a little, one of the problems these days is that we seem to be outcome focused with insufficient attention to relationships and process. (I accept that this may be a western view, however, and that things may be different in other cultures.) A

wonderful writer in this field, Kenneth Cloke, emphasises in his latest book, Politics, Dialogue and the Evolution of Democracy, the criticality of these three components, which he describes as content, process and relationships. He bemoans the lack of attention to the latter two. Cloke points out that nearly all of our focus in solving political problems is on content while comparatively little time is spent on process and relationships. As he points out, this may be fatal to solving seemingly intractable issues – like Brexit. As we know, working hard to build trust and goodwill, being careful with language and showing respect for contrary viewpoints, enhances rather than diminishes the prospects of success.

This is obvious perhaps. But, to an observer, this doesn’t appear to be the experience in Brexit and in other major serious negotiations and we may all suffer the consequences. Perhaps there are exceptions in the work of leaders in the field of mediation, like William Ury for example, whose engagement with a number of negotiations around the world (such as North Korea) seem to be very influential.

In a similar vein to Cloke, in his book, Negotiating the Impossible, Deepak Malhotra describes three central components of effective negotiation in slightly different terms: framing, process and empathy. He says: “In negotiations of all kinds, the greater your capacity for empathy – the more carefully you try to understand all of the other side’s motivations, interests and constraints – the more options you tend to have for potentially resolving the dispute or deadlock.” These are wise words. He goes on to conclude that “a lack of empathy usually guarantees failure.”

Mediators have so much to offer in helping protagonists to consider not just the content and the substantive issues but also the framework or process for negotiations, together with the necessary glue to make it all work – effective working relationships. Politicians and policy makers need this very much. They need impartial, skilled, wise, thoughtful third siders to support them to create effective processes and to build rapport and empathy.

In conclusion, I accept that all this may seem rather naive and may not be enough in all cases.

Tim Hicks would argue that we might need to use rights and power also. In the case of climate change, he says, the urgency of our situation calls for every effort at every level. If we can find opportunities for dialogue and consensus-building, we should pursue those. But progress via that avenue on its own will likely be too slow. Work in the courts and on the streets also seems necessary he argues.

So be it. The crisis is urgent and extremely serious. Mediators must work hard on dialogue and consensus-building. That, as least, can be our contribution to resolution of the world’s most intractable problems. 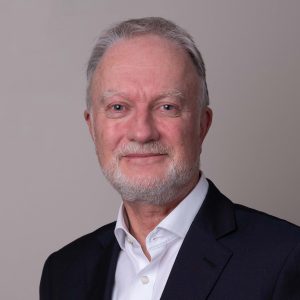 John Sturrock QC (HF 1984-5), founder and senior mediator of Core in Scotland recently carried out a substantial review for the Scottish Government on allegations of bullying in NHS Highland in which he examined aspects of leadership in the public sector (see here). He also co-chaired an expert group on mediation in Scotland whose report makes recommendations to put mediation at the heart of dispute resolution in Scotland (Bringing Mediation into the Mainstream in Civil Justice in Scotland).  He is also a member of the Stewarding Group for Scotland’s Citizens’ Assembly, which will discuss the future of Scotland.