In Spring last year I met Eliza Bonham Carter, Curator and Head of the RA Schools, who made possible the Harkness event in July 2019 at the Royal Academy. Eliza had said that she believed that her father was a Commonwealth Fellow. I had a copy of S Gorley Putt’s Cousins and Strangers and looked him up in the index. Sure enough there were the initials “MBC 1948” and there was the information in the index, that this was Mark Bonham Carter who had attended the University of Chicago as a Commonwealth Fund Fellow where he had gone to study political philosophy, American constitutional history and American ideas. In his short comment on his experience he extols the reforming legacy of Chancellor Hutchins, who believed that a university “should be a place where people think and teach others to think…” Chancellor Hutchins did not believe in football and fraternity systems, rather, a thorough grounding in Aristotelian Politics. 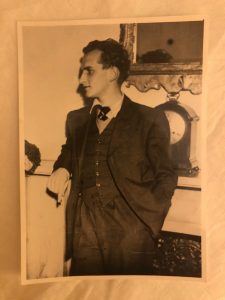 Lord Bonham-Carter is the grandson of HH Asquith, Britain’s last Liberal Prime Minister, and the third child of that great Liberal, Lady Violet Bonham-Carter. I knew that he had, against the odds, won the Torrington by-election in 1958, and that his career was largely as a publisher but I knew little about him. Eliza most generously agreed to meet when she would talk to me about her memories of her father and the possible impact of his Harkness Fellowship on his later life and career. When we met she had had the opportunity to read correspondence held by the family from Mark to his mother during that year in Chicago.

Winchester educated, Mark went up to Balliol in 1940 but his studies were interrupted by the war. The young man was commissioned in the Grenadier Guards. In 1943 the 21-year-old Bonham Carter was captured in Tunisia and imprisoned in northern Italy. With the fall of the Mussolini regime came the opportunity to escape. He disobeyed orders, walked 400 miles to the British lines avoiding capture, and was mentioned in dispatches. The photograph to the left shows Mark Bonham Carter in 1943 on his arrival home after his return from Italy.

Such a story demonstrates already someone who has courage, who has a mind of his own and is prepared to go against authority, and someone who will take risks. However, the immense danger of this escape was tragically underlined within the immediate Bonham Carter family.

Mark was close to Jasper Ridley who had married his elder sister, Cressida, in 1939. Part Russian, immensely clever and slightly older than Mark, Jasper became friend and mentor to his brother-in-law. Jasper had also enlisted; he too was taken prisoner in Italy. Jasper also escaped but his whereabouts were unknown and he disappeared. He didn’t make it.

On his return from war Mark stood unsuccessfully in Barnstaple as a Liberal in the General Election of 1945 and only then did he return to Oxford to conclude his degree in PPE. On graduating from Oxford in 1947, he sailed to America to take up his Commonwealth Fellowship sharing a cabin with another young Commonwealth Fellow, a mathematician called Freeman Dyson. Eliza remembers her father recounting asking Dyson what it felt like to solve a tough mathematical problem. Dyson answered that it is “like seeing a firefly.” He said that there is faint flash that disappears as soon as you see it, and you build a bridge towards it.

Bonham Carter had come to America armed with letters of introduction. He appears a confident young man who seizes the opportunity of the American experience, welcomes it and throws himself into it, an attitude of hard work and application that endured throughout his life. There are letters about meetings with leading businessmen and newspaper owners – fulfilling the “economic” side of his American purpose. He knew and admired Isaiah Berlin and through him met Philip Graham, the Publisher of the Washington Post. We hear that he loved The New Yorker, and hated the Chicago Tribune. It was the time of American concerns about the Russians and the atom bomb. Mark said “they (Americans) really are in a hysterical frame of mind, it’s rather alarming.” His time in America was a formative experience and his love of America never faded.

On his return from Chicago, Mark secured a job at William Collins Publishers through an introduction by American writer and literary adviser to Collins, Milton Waldman. He worked there as a Director for over two decades. In 1955 he married Leslie, Lady St Just, younger daughter of US publisher Condé Nast. 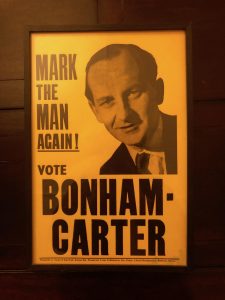 It was three years after this that he stood as the Liberal candidate in the Torrington by-election. To everyone’s immense surprise he overturned a 9,000 Conservative majority and won the seat by 219 votes. His tenure as an MP was short; he lost the seat the following year in 1959. However, his commitment to the Liberal Party was demonstrated when he stood again, although unsuccessfully, in 1964. For the last eight years of his life he served in the House of Lords, having become a Life Peer, as Baron Bonham-Carter of Yarnbury, in 1986.

He was able to play an influential and constructive role in public affairs through his appointment in 1966 by Home Secretary Roy Jenkins to be the first Chairman of the Race Relations Board. This was the time of strong opposition to mass immigration and in 1968 came Enoch Powell’s famous Birmingham (Rivers of Blood) speech. He was Chairman of its successor, the Community Relations Commission from 1971-1991. He was appointed Vice Chairman of the BBC in 1975, a post that he embraced. Eliza tells me that he was not much of a TV watcher except for the news before this, but that the family then bought a video and a wider menu of programmes was regularly attended to. Clashes with Mrs Thatcher, who was no favourite of Bonham Carter, led to his appointment as Chairman being blocked by Mrs Thatcher, and it was she who had reportedly vetoed an earlier inclusion of his name from an honour’s list. He stood down from publishing in 1989 when Collins was taken over by Rupert Murdoch’s News Corporation and the publisher was combined with Harper & Row which NewsCorp had acquired two years earlier. His list of public offices is a long one. From the late 50s to the 90s he held Directorships of the Royal Opera House, the Royal Ballet and leading board roles in a range of charities and institutions, including the Anglo-Polish Round Table Conference and the Consumers Association.

Eliza’s memory of her father is of an intensely political animal, and of being brought up in a family where political matters were continually discussed, with all the children involved and encouraged. His Liberal views, in the best sense, shine through. Her father was a man who enjoyed life, loved to dance, who encouraged inter-generational debate and socialising. He died suddenly and unexpectedly of a heart attack while holidaying in the family’s house in the south of Italy in 1994. He was absolutely ambitious for his daughters and did not temper his ambitions for them because of their gender. Eliza’s parting thought about her father was that the experience of America had given him a much wider understanding of and response to popular culture than a man of his background might otherwise perhaps have had. Whilst he had a deep love for opera and ballet, he was open to a much wider range, evidenced by his critical writing and reviews, and by his taste in music. He adored American Jazz, Debby Harry, Tammy Wynette and greatly admired Fred Astaire.

Judy Digney was Trustee and Director for the Harkness Fellows Association for 16 years until 2019.