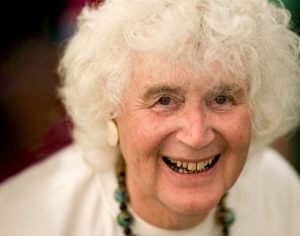 Jan Morris, who died at the end of 2020, was a Commonwealth Fund fellow in 1953 and wrote about her fellowship travels in her first book, Coast to Coast. It begins with a gripping approach to New York:

At one time or another I have approached some splendid places, most of them distinct with mystery or age: Venice on a misty spring morning, silent and shrouded, like a surrounded knight-at-arms; Moscow, its fortress barbarically gleaming; Everest, the watch-tower, on the theatrical frontiers of Nepal and Tibet; or Kerak of the Crusaders, high and solitary in the mountains of Moab. All are celebrated in history or romance; but none lingers so tenaciously in my memory as the approach to the City of New York, the noblest of the American symbols.

The approach from the sea is marvellous enough, but has become hackneyed from film and postcard. It is the road from inland that is exciting now, when Manhattan appears suddenly, a last outpost on the edge of the continent, and the charged atmosphere of the place spreads around it like ripples, and you enter it as you would plunge into a mountain stream in August.”

Like many fellows of that era, Jan (then James) was already well travelled before the fellowship, having joined the army at 17 during WW2, followed by journalism as a foreign correspondent.  A clever and inspired reporter, Jan was initially based in Cairo for the Arab news agency. There was also a role with the Times, including accompanying the first successful ascent of Mount Everest and being the first to release the news of success using encoded messages.  Later with the Guardian she gained crucial evidence about French-Israeli collusion in the Suez crisis. It was only after 10 years in journalism that Jan decided to focus on writing books.

In 2008 Jan gave the Annual Lecture for the Harkness Fellows Association, entitled ‘Reality v Imagination in the Literature of Place’. Jan introduced us to Coast to Coast as follows: “Though I say it myself I am well qualified to speak on the subject, as I’ve spent my life writing what are generally called travel books.  As a matter of fact the very first one I wrote I wrote for the Commonwealth Fund, sort of. I went to America in 1953 on a Commonwealth Fund fellowship, and it was the rule in those days that one must spend some time at an American University, and some time travelling. Well, I checked in at Chicago University and found a return to academia not at all to my taste, so I decided to skip the University bit and spent the whole year travelling around America. At the end one had to submit a report to the Commonwealth Fund people and what I did was write a book about my journey and hand it in as my report. They didn’t mind a bit! So not only was that fellowship one of the very best presents I ever had, it really started me off as a writer of books”.

Jan’s son Mark Morris travelled to the US with his parents and recalls…….

“The Harkness has a lot to answer for, from the development of my father’s writing style and life’s work, to my subconscious childhood impressions. How lucky we both were!

My earliest memories are, in their own way, quite spectacular: of Cairo, or more specifically of being on our houseboat on the Nile, or being even more specific than that, of my Egyptian nanny on that houseboat on the Nile. My father, James Morris, was then a Times correspondent, but that sojourn on the great river was not the first foreign adventure that my brother Henry and myself had been on, thanks to what is now known as the Harkness Fellowship. 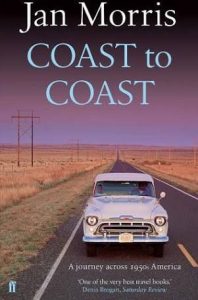 For, thanks to the Harkness, at the end of 1953 we went off to the United States, on a journey that was to lead to my father’s first published book, Coast to Coast – how very 1950s brash American that it was called I Saw the USA in the American publication!

We went in style, too, sailing across the Atlantic on the United States, then the Blue Ribband holder for the fastest Atlantic crossing. Henry was then a baby, and was very ill with whooping cough on the voyage. The ship’s nurse wanted to bathe him in ice cold water (which might have indeed finished him off), but my feisty mother Elizabeth took it all the way to the captain, and he was spared that particular American torture.

And then we were in New York.

Alas, I can consciously remember nothing of it, not even the visit to the Amish, or the ferocity of the Niagara Falls, or the hurricane devastation in Vicksburg, Mississippi, or the time spent with the Navajo. But I am quite sure that something seeped into my subconscious – and not just the family stories of, for example, being on the dockside watching the first nuclear submarine ever, the Nautilus, being launched, or being knocked against a balcony by a large German Shepherd (Alsatian to British readers). The balcony broke and I crashed to the ground – that did have a psychological effect, as for the next 30 years I was afraid of dogs.

Of course, I had no idea at the time what my father was up to. What must have been a kaleidoscope of impressions to me was the cornucopia of material for my father. And Coast to Coast remains remarkable all these years later, I think, for a couple of reasons.

First, reading it again now there are inevitably elements no longer recognizable in the States, and some reactions that reflect the times. But it is extraordinary how so much of what Jan Morris was to call “the happiest time of the States” has remained relevant, perhaps even more so after Trump – from the sense of entrepreneurial opportunity and entitlement, to, alas, a racism that has not gone away. It’s well worth reading now, not just for a portrait of the U.S.A. in 1954, but for what it obliquely says of the U.S.A. in 2021.

Second, it is so recognizably the well-spring of the classic Jan Morris writing style – and not just the writing style, but the viewpoint, the attitude. When she asks a lady whether her son, a Naval conscript, intended to make the Navy his career, and she replies “in a voice that might have amused Nelson, ‘Oh dear me no, he’s a young New York intellectual’”, it is surely the first of so many similar conversations over Jan Morris life.

That life view, that writing style, didn’t really appear again until Venice – the intermediate books were different in intent and subject. But it definitely germinated in Coast to Coast, and perhaps that has something to do with the States itself. It was the first time my father had been to the States, and, of course, it led to a life-long love of, and generally admiration for, the country. It was also the first time my father had set out specifically to discover place, and to write a book about it.”

There followed a stream of successful books; poetry, history, place and city studies, novels, memoirs, essays and biographies, over 40 in total. Jan’s studies of place are more than travel books. Although awarded a Lifetime Outstanding Contribution to Travel Writing Award in 2018, when interviewed on the BBC in 2016 she had told fellow winner Michael Palin that she did not like to be described as a travel writer, as her books are not about movement and journeys; they are about places and people. Many know her for her Pax trilogy, on the history of the British Empire.  Others came to her work through Conundrum, a frank and engaging description of the part of her life when she undertook gender reassignment after transitioning from living as male to living as female.  Morris’ 1985 novel Last Letters from Hav,  an “imagined travelogue and political thriller“ was shortlisted for that year’s Booker Prize. 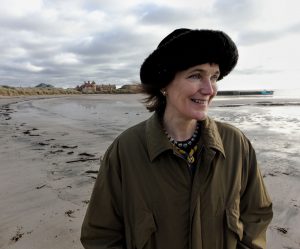 Jan received multiple awards for her writing, which was widely praised for its sense of place, breadth of insight and spirited style. Poet Katrina Porteous  (HF1982-84) shares a personal reflection on a recent piece of Jan’s writing:

“Towards the end of her life, Jan Morris published an essay, ‘Battleship Yamato: Of War, Beauty and Irony’. In it she describes, with profuse illustrations, the final hours of the Japanese warship, the most powerful there has ever been, before it was sunk by US forces in April 1945 with the loss of 2,278 Japanese lives. The Yamato was a terrifying machine of war, in the same class as the British and German battleships, the Prince of Wales and the Bismarck. Unusually, Morris places these appalling creations of the human imagination in the context of the humanities, finding Yamato ‘vicious, cruel, but beautiful in its kind, like a tiger on a leash.’ Its imperial ambition is ‘Shakespearean, Nelsonian, Napoleonic, Tennysonian.’ She draws on musical metaphors for the ship’s progress: ‘Chopin might have orchestrated it, with his streaks of something dark among the ecstasies,’ and compares its preparations for battle with those of Achilles and Ajax, Spartan and Greek, or fighters on the eve of Waterloo, Gettysburg or Berlin. The essence of Yamato’s coming ordeal is summed up for Morris in Picasso’s Guernica, ‘groping, crying for meaning and finding none.’

My father, in his 90th year, read Morris’s essay with keen interest. A pathologist by profession, he had spent his spare time throughout his life building models – aircraft, tanks, warships – from kits. Over decades he filled rooms with them; fittingly microscopic in detail, painstakingly accurate, the machinery of war, made safe – and, yes, sometimes beautiful. I was familiar with his 1:700 scale model of the magnificent Battleship Yamato.

Morris’s imagination, brimming with metaphor, allusion, allegory, irony, dazzling cultural connections, was telescopic rather than microscopic in scale. Or rather, she connected the two. She helped me to see in each of those little models a resonant moment in history: in the case of Battleship Yamato, ‘the extinction of the imperialist ideology’ and the end of Empire, which for Morris was a lifelong obsession. Yamato was at once the successor to the ancient Samurai tradition, the apogee of five centuries of naval warfare, and the end of the age of the great battleship. Her undoing was modern American carrier-based airpower: the Hellcats, Helldivers, Corsairs, Avengers and Wildcats of my father’s display cabinets. My father and Jan Morris were born less than three years apart. Each spent a lifetime making sense of the century they lived through. In Morris’s case that sense-making was her whole life’s work, accomplished through her ceaseless, questing travels, and given lasting expression in her luminous, deeply-civilized, humane and compassionate prose.” 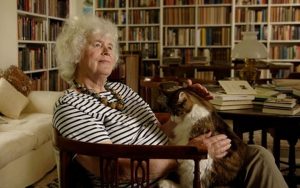 Observant, engaged and creative to the end of her life, Jan published In My Mind’s Eye, her acclaimed first volume of diaries in 2018, which became a Radio 4 Book of the Week.  In 2020, she published Thinking Again, a further volume of daily musings in which she referenced her enduring love for America.

Mark Morris is a writer, award-winning librettist, music critic, theatre director, broadcaster, curator, and photographer, and has been teaching at the University of Alberta since 2000. He received his BA and MA from the University of Oxford, and completed the first ever Creative Writing PhD in English in Canada, at the    University of Calgary, in 1996.

Katrina Porteous, (HF 1982-84) is a multi-award winning poet. She is also President of the Northumbrian Language Society and an ambassador for New Networks for Nature. See more about her here or in her website http://www.katrinaporteous.co.uk