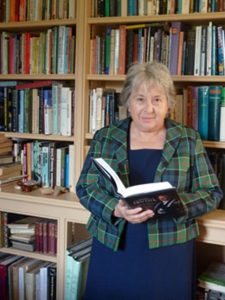 One man who played a major part in setting the fellowships soundly on track was Sir James Colquhoun Irvine, renowned British scientist, and Principal and Vice Chancellor at the University of St Andrews.

Irvine, the trusted friend and collaborator of Harkness from the time of their first meeting until Harkness’ death in 1940, was the lifetime Vice-Chairman of the Commonwealth Fellowships – later renamed the Harkness Fellowships – and presided over the selection committees until his own death in 1952. 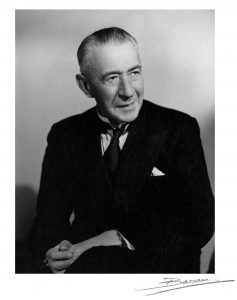 Sir James (KBE, DSc, FRS) studied at the Royal Technical College Glasgow, before gaining his BSc in Chemistry at St Andrews. He was awarded an 1851 Exhibition Scholarship, which enabled him to enter the University of Leipzig to study for a PhD under Wilhelm Ostwald and Johannes Wislicenus.  Returning to St Andrews, he gained the St Andrews’ Doctor of Science degree, and taught Chemistry at the University. He was appointed Professor of Chemistry in 1909 and Dean of the Faculty of Science in 1911. In 1921, at the young age of 43, he was appointed Principal and Vice-Chancellor of St Andrews University. For a number of years he also served as acting Principal of University College Dundee. His tenure at St Andrews saw the renovation and restoration of both buildings and traditions. His commitments spanned further than the University, into higher education in Britain and abroad.  The serious yet imaginative Edward Harkness could perceive how fruitful their collaboration could be.

In 1918, on the other side of the Atlantic, Anna Harkness, a wealthy widow, had set up the The Commonwealth Fund with the mandate that it should “do something for the welfare of mankind.” Among the first women to establish a foundation, Anna initially endowed it with a gift of nearly $10 million. The Fund’s first president was her son Edward, who was committed to building a responsive and socially concerned philanthropy and who also gave generously to the Fund’s endowment. 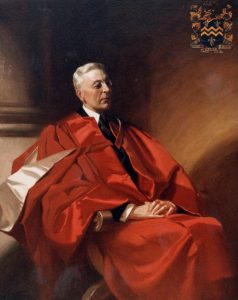 Edward Harkness; reproduced by kind permission of the University of St Andrews.

Edward hired a staff of talented and experienced people, and encouraged them to experiment with fresh ideas and to take chances, a way of working advocated to this day by the Fund’s board of directors.  Always mindful of the long-term payoff of investments in people, Harkness launched the international Commonwealth Fund Fellowships to bring young men and women from the United Kingdom, Australia, New Zealand, and other English-speaking countries to the United States for extended study and travel.

In January 1925, Harkness sent Max Farrand, the distinguished American historian, to London to meet with a gathering of British Vice-Chancellors in order to launch the Commonwealth Fellowships scheme.  Among these British university representatives was James Irvine, by then five years into his role as Vice Chancellor of Scotland’s oldest University.

Farrand and Irvine encountered a powerful cartel from Oxford and Cambridge who were determined to control the show.  Irvine later recalled that the representative from Oxford spoke first at the meeting and said that out of the initial 20 annual Fellowships, his university could safely lay claim to six.  This paved the way for Cambridge’s figure of six, and London, not to be outdone, also claimed six.  Irvine, who was representing the four Scottish universities jumped to his feet, saying  ‘Gentlemen I see that the number to be assigned to Scotland is minus four.’

Max Farrand was clearly impressed and amused; he slipped Irvine a note asking him to have lunch with him after the meeting.  He immediately wanted to place Irvine as Chairman of the British committee of trustees, but Irvine had a more subtle suggestion. He proposed that the Chairman should always be the neutral chairman of the UGC (University Grants Committee); he, Irvine, would be the permanent Vice-Chairman of the Commonwealth Fellowships and other trustees would be appointed for short terms from the other British Universities.  Irvine’s influence over the Commonwealth Fellowships was assured.

Before long, Irvine had made the acquaintance of Edward Harkness, and over many summers on both sides of the Atlantic their acquaintance grew into a deep friendship.  Harkness, the most discreet of men, valued having a personal friend he could trust on the British side of the programme. Sir James saw himself as Harkness’s mouth-piece and lieutenant on this side of the Atlantic and personally interviewed every candidate between 1925 and 1952.  He considered the work that he did for the Fellowship to be of the utmost importance to future understanding within the Anglo-Saxon world. Even more, Irvine saw it as his role to impart to the British candidates applying for the Fellowships a living impression of Edward Harkness, their benefactor.  It was immensely gratifying to him to observe the success of Harkness Fellows in their future careers.

Perhaps because he too was a Scot by ancestry, Harkness saw in Irvine someone in whom he could truly confide.  Summer after summer, in the ‘20s and ‘30s, James Irvine spent time in America, to be with his friend Edward and to assist with the New York side of the administration of the Fellowships.  Days were spent at Eolia, the Harkness family summer home on Long Island, where the two men relaxed in each other’s company, sailed off Long Island Sound and spent evenings exchanging their idealism and plans. Irvine recognised in Harkness a man not dissimilar to himself in background, with the plain religious beliefs of their Scottish forebears and with the same determination to change education for the better.  As well as donations to the Commonwealth Fund, Edward made donations to secondary and higher educational establishments, often associated with a requirement to rethink their model of education. 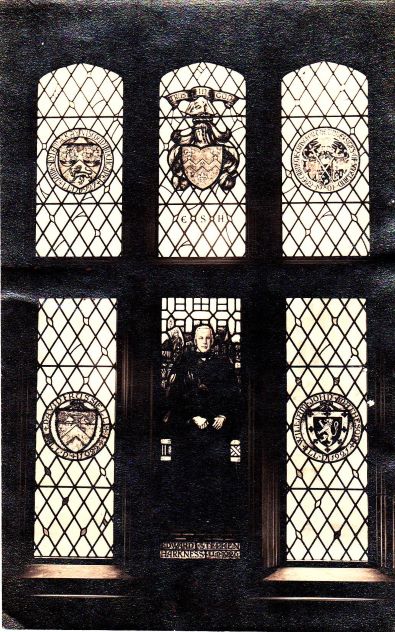 So it was that Jim Irvine found in Edward a sympathetic ear to his concerns for St Andrews.   The critical growth of St Andrews during his early years as Principal was an intractable problem until a large gift to the University of St Andrews from Harkness made possible the building of a fine hall of residence, the restoration of the University Chapel and the foundation of Harkness Scholarships.  Over many years, Harkness was an outstanding friend to St Andrews, which rewarded him with an honorary LLD. Irvine also helped Harkness envisage and set up the Pilgrim Trust in the UK.

Irvine was a distinguished man on many fronts and particularly in the field of both domestic and international higher education. The gains made by the University as a result of his leadership necessarily reflected a loss in his contribution to scientific research as a talented scientist.  Irvine had had to jettison his burgeoning career as a chemist in order to lead St Andrews University out of the post WWI slump. During WWI, he and his team of chemists in St Andrews helped save the lives of thousands of troops; his application to pharmaceutical use of natural sources such as dahlia tubers and seaweed enabled the protection of Allied forces against deadly diseases such as meningitis, the scourge of the campaigns in Asia Minor. After WWI, his reputation as a carbohydrate chemist was global.  His discoveries led to the understanding of ‘ring structures’ of carbohydrates and helped to inform developments in biology, such as the discovery of DNA.

The James Irvine Scholarship in Chemistry.

To recognise the skills and values of Sir James and to celebrate the centenary of his appointment as Principal and Vice Chancellor, St Andrew’s University has launched the James Irvine Scholarship in Chemistry – an acknowledgement of Irvine as a world-class chemist.  The University’s goal is to finance a perpetual undergraduate scholarship in chemistry in his name at the University where he lived the whole of his adult life.  His family have given a generous contribution, and the fund is growing in a healthy way.

Julia writes “Although I am his granddaughter I feel that after the passage of so many years I can be permitted to talk about him in an unbiased fashion.  He was never a rich man, and a scholarship in his name is something that he would have thrilled to.  Although I was young at the time, conversation round the family afternoon tea-table was often as not about the Commonwealth Fellowships and of course the Pilgrim Trust: another of Harkness and Irvine’s joint ventures to promote transatlantic sympathies.”  Her book, ‘James Colquhoun Irvine: St Andrews’ Second Founder’ is alas now out of print but, in connection with the scholarship fund, a signed copy of will be given to every donor to the James Irvine Scholarship Fund of £500 or more.

Irvine undoubtedly touched the lives of countless Harkness Fellows. Those who would like to donate can find a link here: https://sparc.st-andrews.ac.uk/irvine-scholarship

Julia Melvin, granddaughter of Sir James Irvine, was also a St Andrews student. After graduating in English Language and Literature she trained as an archivist with the Royal Archives at Windsor and then worked as a textual editor for the Royal Commission on Historical Manuscripts. She went on to work as a freelance research historian and consultant archivist. In 2011, Birlinn Press published an in-depth biography of her grandfather, using extensive original sources from the family archive.

All photos courtesy of the family and University of St Andrews.