In the calm splendour of the Devon’s medieval Dartington Hall, Sir Harrison Birtwistle (HF 1965-67) – Harry to his friends – is honoured by a talented group of international musicians, celebrating his recent 85th birthday.

Directing the Dartington International Summer School and Festival for her fifth and final year, Joanna McGregor CBE arranged Harry’s birthday concert to showcase his compositions as well as the talents of the musicians who teach at the Summer School, whom Harry would be joining that week on the faculty. Covering a selection of Birtwistle’s works, the professional musicians entertained Summer School participants and guests, playing many of his pieces and a couple by Stravinsky (see the players and pieces listed below). Those of us sitting near to him in the Hall watched the smile on his face broaden as each piece concluded.

Successful though he surely is, Harrison referred in his words of thanks to the ‘insecurity of being a creative person’ – encouraging for all of us who aspire to the success he has enjoyed. His work is not loved by all-comers, but Joanna, one of Britain’s most gifted pianists, who has premiered Birtwistle’s music in the past, explains in her programme notes: “Sure, Birtwistle’s written some very loud dissonant music ……. but it’s also beautiful, tender and exhilarating, and never without some kind of emotional punch.” Joanna also included in the concert some of his shorter piano pieces, written for friends and family and often humorous and playful. 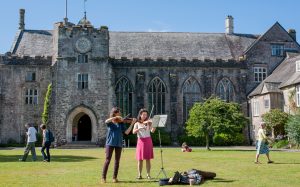 Playing in the Courtyard

With energy levels that belie his chronological age, Harry was guest coach for the Advanced Composing students at this, the 72nd year of the Summer School. The atmosphere at Dartington during the Summer School month is energising. Dartington is a place of extraordinary beauty and creativity and as you walk around its courtyard during the festival you hear strands of music emanating from centuries-old stone buildings as well as from 1930’s Bauhaus-style settings, where students learn and practice. You hear instruments of all kinds, ancient and modern, and voices – many voices. The Summer School is for everyone – professional musicians, music students of all ages, people who love to play, sing and write and people who just love to listen. Internationally renowned musicians teach and direct the courses and also perform concerts in the evenings for the public.

Birtwistle is no stranger to the Dartington Summer School, having first been involved during the reign of its founder and first Artistic Director, Sir William Clock CBE, and repeatedly since. This year, students of the Advanced Composing course are benefiting from Harrison’s expertise. In a break, he chatted with our editor.

Born in Lancashire, Harry came early to music – initially through the clarinet his mother bought him at the age of 7. His skill led to a range of local musical activities and won him a scholarship to the Royal Manchester College of Music.

“The Harkness Fellowship was the best thing that happened to me – it gave me time to compose, focused solely on my composing and came at a key stage in my life.” At the time he applied, he was working as music master in a public school, supporting his wife and three children. The school had its own orchestra and the music was good, but Harry struggled to find time to compose. He heard about the Harkness Fellowships from his colleague Peter Maxwell Davies, who was a Harkness Fellow in 1962-64 and later, coincidentally, Artistic Director of the Dartington Summer School from 1979 to 1984. As well as time-consuming, life as a music master with a family was also financially tough – Harry told me that he was chased onto the ship by the hire purchase company that wanted their carpets paying for before he left for the States.

For the first year Harry studied at Princeton, mainly musical theory. In his second year, he was based in Boulder, Colorado, where he was able to “get practical” – meaning there were musicians who could play his material for him. This is a great bonus for any composer. During his time as a Fellow, Harrison completed his first opera, Punch and Judy – an important work which contributed to establishing Birtwistle as a leading voice in British Music.

At the end of Birtwistle’s Dartington week-long course, just as in his Colorado days, his students were able to hear their pieces played by the professional musicians. Introducing the performance of these pieces, Harry bemoaned the huge amount of back ground music in modern life, arguing rather compellingly that we should actively listen to music.

Harrison has returned to the US over the years as a visiting academic to places such as Harvard, Buffalo and Tuscaloosa. He is still composing, currently working on a piece for Sir Simon Rattle and the London Symphony Orchestra. 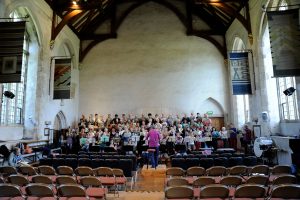 Harry’s last recollection as we ended our chat was again about the transatlantic crossing, this time coming home. He and his family had had some trouble with their car on the return trip from Colorado to New York and were so late arriving that they had to drive right to the gangway and leave the rental car on the quay. His final memory of his Fellowship is that car on the Manhattan quay as they sailed away.

For more about Dartington’s summer school and festival see here