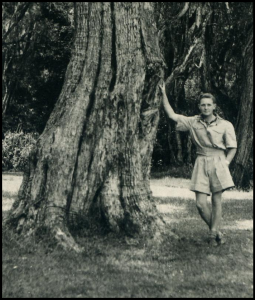 Ken Sargent was born in 1924, and brought up in Keswick, Cumbria; with the English Lake District at his doorstep it was little wonder that he developed a life-long interest in the environment and its management. After reading Forestry at Edinburgh University,  he was posted to the Kenya Forest Department.  In 1957 he was awarded a Commonwealth Fund Fellowship which involved studies in Public Administration, Economics and Land Use Planning at Harvard University under the personal direction of Professor J.K. Galbraith in 1957. A subsequent and extensive travel itinerary arranged by the US Forest Service gave Ken an in-depth perspective into the administration of forest resources and their role in national planning, also into the techniques of Agricultural Extension.

Here are some of his reflections on his time as a Fellow extracted from an autobiography written in 2012; “Beyond the trees – a forester’s reminiscences of adventure, international travel and a fascinating career”.  Although his field of study was unique, his account will prompt recollections of similar feelings and experience for other fellows. 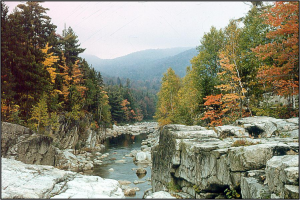 “While writing reminiscences such as these, there is much time for thought. It now occurs to me that my life has been dominated by a series of major challenges each of which, in its own way, has proved to be an important factor in the progression of my career. In every single case I was alarmingly ill informed and ignorant of the ramifications of the decisions made; the visit to the USA was no exception. My preparation for the trip was negligible; Mombasa, bathed in its constant envelope of enervating heat and humidity, was not the best location for research on America. Pressure of work in Mombasa dominated the final months there. It was inevitable that my knowledge of the USA was abysmal. Perhaps this was no bad thing.

We were, aboard the luxury cruise liner Caronia, of 13,183 tons, en route from Liverpool to New York. The passenger list was dominated by Americans returning home, many of whom took an interest in us since a Fellowship to Harvard University was seemingly held in high social esteem; indeed it clearly ranked as the most prestigious of all. Doubts as to my capacity to cope began to emerge. Had it really been a wise decision to commit myself so readily, without serious research into the inevitable consequences? This venture was rapidly becoming a major step into the unknown.

Surely any first-time visitor to the United States via New York must gasp with cultural shock at the concrete jungle of the Manhattan waterfront as it emerges from the early morning mist. This imposing web of ultra high-rise buildings forms a grandiose façade to an interior dominated by a seemingly endless maze of concrete canyons, at the base of which was a never ending stream of vehicles and people. But New York is not America. It stands alone in splendid arrogance – dynamic and brash. It is unique – a gateway to what? This I had yet to experience.

New York came and went in a flash……… We were met by the Deputy Chief of the Division of International Fellows of the Harkness Foundation, Lance Hammond, who warmly welcomed us to America. Lance was one of those few men in my life who made a profound and lasting impression.  …..a brief stay in a hotel on 42nd Street suddenly immersed me into the world of excruciating noise, from an endless flow of traffic. The 24 hours-a-day cacophony of police cars, fire engines and ambulances, all with their blaring sirens, together with the accompanying heavy traffic, was at an intensity so extreme that it was difficult to relax. This was clearly the normal well established way of life in the big city. On the other hand, peace reigned supreme at the headquarters of the Harkness Foundation, located on the edge of Central Park. Here were superb back-up facilities and instant action.” 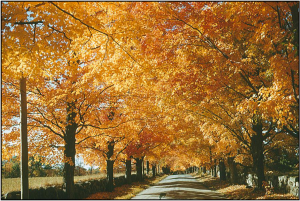 After a brief trip to Toronto, Ken started his studies at Harvard ……… “The failure of my first attempt to find a room, led me to scrutinise the University notice board on the campus for a suitable address. Beside me was a tall athletic type, similarly engaged, with whom I fell into conversation. It quickly transpired that he was a member of the United States Forest Service and was attending the same course as myself! Bob Potter was his name. Though neither of us could have realised it at the time, this was to be the start of a life-long friendship. ……..”  They ended up sharing a room in a boarding house, Bigelow, with other students and employees of the University and MIT. “My close association with this group of articulate, postgraduate enthusiasts forced me to sharpen my mental agility – having an Englishman in their midst was a new experience! They played an important role in bridging my mental gap between the dormancy of Africa and the dynamics of the American system…….”

No sooner were we installed at Bigelow than off we went on our tour of the States of Massachusetts, New Hampshire, Maine and Vermont. Here was an area not only fiercely proud of its historic heritage but with the added advantage of a spectacular “Autumn Fall”. This was my first view of a landscape totally suffused by a kaleidoscope of vibrant colour. When viewed on the typical cold, crisp, sunny days of Autumn it was yet another of those never-to-be-forgotten highlights…….. 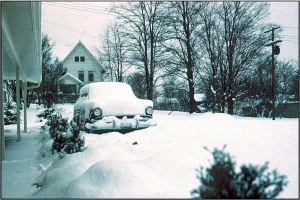 … December saw me purchase a Ford Country Squire Station Wagon in which all seats folded flat to give ample sleeping space for both of us (at least that was the plan) for the travel phase of our itinerary. Yet another innovation was an introduction to my very first “Credit Card” – for use at Texaco gas stations and which, of course, proved to be invaluable. Christmas saw me back in Toronto with Gwen and her family, in hectic preparation for our “American Safari”. We left on New Year’s Day via Buffalo and were snowed off the road for the first night to enjoy the hospitality of the first of a great many American motels. We never did use the car to sleep in! This was the start of a truly remarkable journey.”

Ken and Gwen travelled for nine months to lands managed by the Federal Forest Service, National Forest and Forest research stations, “through 37 States to cover a total of 34,100 miles.  …… The trip was remarkably free of problems, the car performed magnificently, and we quickly adapted ourselves to this new and exciting “nomadic” lifestyle in which, even in the remotest of locations, we were treated, throughout, with exceptional friendship and courtesy.” Gwen had wisely taken slides of their time in Kenya with her and shared illustrated stories of their life there by way of a thank you for the hospitality offered.

Through a childhood family contact – Ken had helped his father deliver meat to the owners of the Cumberland Pencil Company in Keswick – they were introduced to the multi-millionaire owner of the California Cedar Products Ltd, Charles Berolzheimer, “who spent much time and effort to ensure our stay in America was a success.” On one occasion Charles “invited us to spend a week end on his private island on the coast of Georgia. Having no idea what to 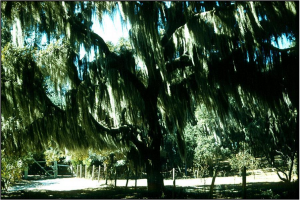 expect, we were taken by small cabin cruiser from Brunswick with its lovely giant Live Oak trees festooned with Spanish Moss through a complex series of narrow channels, past mud flats inhabited by a large number of duck and other wild fowl, to Little Saint Simons Island where, in addition to other buildings, was a “Lodge” constructed in the traditional log cabin style, but on stilts, to an elaborate Bavarian design. It was spacious, ornate, smelled deliciously of Cedar wood and had walls decorated with hunting trophies interspersed with alligator skins. A magnificent rug composed of 200+ racoon skins formed the centre piece to the floor of a spacious lounge……. no sooner had we arrived than the wind reached gale force and temperatures gradually fell to 16 degrees fahrenheit (minus 8 degrees centigrade). With only a minimum of warm clothing we suffered throughout the night as the wind howled through the cracks which seemed to bedevil the structure; there were neither storm windows nor central heating. In the bedroom a single small pot bellied stove provided that modicum of heat essential for survival, but only just! Amongst this Bavarian style grandeur we had never, ever, been so desperately cold,” though “in warmer retrospect we are unanimous that our stay on Little Saint Simons Island was indeed one of the most unique, fascinating and unforgettable episodes of our visit to the USA.”  It is now an eco-travel resort. 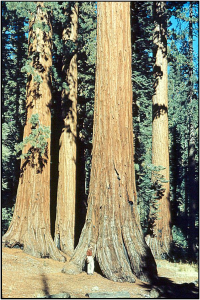 “Of all the National Parks visited on the wide ranging study tour, the Yosemite was the most impressive. I doubt if there can be many places to compare with it – at least the American people thought so, for we were booked in to stay at Camp Curry for the Memorial Week End when, almost overnight, in excess of 30,000 visitors entered the Park to disport themselves in a veritable forest of tents. Having travelled through the States of the Eastern Seaboard, followed by the Southern States, to the great farm belt of Oklahoma, and Kansas, through the Eastern Rockies and the dryness of the South West, the sudden impact of the Yosemite Valley where everything is superlative with a capital S, was dramatic. To a forester such as myself, the super sized trees were a source of wonder; standing amongst groves of the giant Redwoods (Sequoia giganteum) being surrounded by trees of up to 30 feet in diameter and 250+ feet tall was a somewhat ethereal experience.”

Ken’s final report focused on the “complex political, economic and social issues involved in the concept of a nationally coordinated land-use policy, management and administration”, with a focus on the “pivotal role of the forest sector……  In retrospect, …..Harvard taught me to think, to analyse and to seek alternative solutions to problems, whilst the Study Tour forced me to express my opinions, to argue my case, and to have confidence in meeting people. In actual fact, I had emerged as a totally different Ken Sargent to the one who had left Kenya only a year previously. There can be no doubt that the “American Experience” was, and continued to be, a significant factor throughout the remainder of my professional life.” 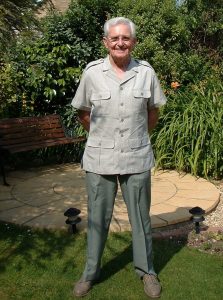 Ken moved on to a successful career in many countries linking forestry, land use and agricultural policies with national. economic and social policy.  His model for analysis of these issues was taken up by the World Bank for broader application in developing countries.  In recognition of this success, Ken was presented with the prestigious B.R. Sen Award of FAO (1974), being the first Englishman and the first Forester to receive this honour. In 1966 Ken was elected an Honorary Member of the Society of American Foresters, and he was appointed an OBE in 1967. Ken died in October 2020, aged 96.