Environmentalism in a time of Covid 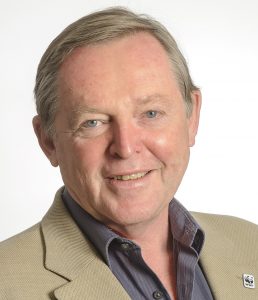 Not a year goes by without news of some environmental disaster happening somewhere or another around the globe.  2020 is no exception.  Wildfires across Australia and California, temperatures of over 35° Celsius in the Arctic, locust swarms in eastern Africa brought on by exceptional climatic conditions, hurricanes along the Gulf Coast and perhaps the worst fire season in the Amazonian forests on record.  These events are coming on top of the daily normal which include the dangerous levels of air pollution in world cities, huge floating islands of plastics in the oceans and the extinction of terrestrial and marine species just about everywhere.

And just when you thought it could not get any worse, along comes the SARS-CoV-2 virus. The steady disappearance of previously uncultivated wild lands, and the ensuing transfer of animal pathogens into humans, is now commonly thought to be a principal cause of the resulting pandemic. Environmentalism has morphed into a first order public health concern and gained a place in mainstream politics, a far cry from its previous frequent put down as a niche concern of tree huggers.

Gro Harlem Brundtland, Prime Minister of Norway and Chairwoman of the World Commission on Environment and Development, addresses the United Nations Conference on Environment and Development (UNCED) held in Rio de Janeiro, 3-14 June 1992. The World Commission Report, ‘Our Common Future’, published in 1987 is widely credited with bringing the concept of sustainable development into the political mainstream.
UN Photo/Michos Tzovaras

And not before time. How did it come to this? How did we miss the early warnings sounded decades ago by leading scientists and academics, including Rachel Carson, Garrett Hardin, Gro Harlem Bruntdland, the Club of Rome and many others?  How did we allow a perfect storm of climate disruption, degradation of nature, resource depletion topped off by a global health pandemic, and all the resulting human misery, to come and smack us between the eyes in 2020?

Fifty years ago, on 1st January 1970, President Richard Nixon signed into law the US National Environmental Protection Act (NEPA), landmark legislation setting a model for the rest of the world.  It is interesting to look back at the Act’s Preamble to see the early beginnings of green thinking – a vision tempered somewhat, at least for deeper green environmentalists, by its pronounced utilitarian leanings.

“To declare national policy which will encourage productive and enjoyable harmony between man and his environment; to promote efforts which will prevent or eliminate damage to the environment and biosphere and stimulate the health and welfare of man; to enrich the understanding of the ecological systems and natural resources important to the Nation….”

On the other side of the Atlantic, public opinion in Europe was shifting.  A growing number of pollution incidents started to capture public attention, more localized in the 1950s and 60s but becoming regional and even global in their impact in the following two decades.  Acid rain particularly affecting Scandinavia, the widening hole in the ozone layer and the Chernobyl nuclear disaster in Ukraine in 1986 all showed the limitations of national borders in guaranteeing environmental and hence national security. These, and other environmental controversies of the time, helped to kick start European countries and institutions on a journey that three or four decades later would see them emerge as the global environmental leaders on the world stage.

That world stage included a succession of United Nations Earth Summits held roughly every 10 years or so since 1972.  Looking back, the high water mark for the environmental movement may have been the 1992 UN Earth Summit in Rio de Janeiro. Not just the US and the EEC, of course, but over 100 Heads of State and Government joined in agreeing a far reaching global environmental concord, the so-called Agenda 21. A desertification convention, a convention on climate change and a biodiversity convention were all opened for signature at the conclusion of the global summit.

There have been many setbacks since. The political events of the last 30 years, including the aftermath of the 2001 terrorist attacks in the United States as well as the 2008 financial collapse, have had huge chilling effects on progressive policies across the board. Environmental policy is not alone in having suffered from these geopolitical “earthquakes” which obviously diverted political attention elsewhere; social and human rights policies were clearly other casualties.

But the environmental field had particular characteristics to contend with. The most obvious is the increase in human population numbers, roughly speaking a doubling of global population over the past 50 years to now stand at 7.8 billion people.

It is not only the numbers that matter.  Rising living standards and disposable income available to people across the globe have led to ever increasing consumption of resources and fueled wildly optimistic expectations of unlimited planetary abundance.  Put simply, nature is competing for space with people and is invariably the loser.

The curse of “market failure” as it relates to environmental goods and services is another.  The negative consequences for the environment of pollution in its many forms are often dismissed at best as a necessary price of growth or, at worst, simply as “externalities”.  Nature gets short shrift by virtue of seeming to have no intrinsic value in the modern calculus which falsely equates rising economic growth with increased human well-being. 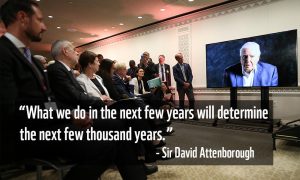 Sir David Attenborough addressing a WWF audience. The WWF Living Planet Report published by WWF in September 2020 revealed that the population sizes of mammals, birds, fish, amphibians and reptiles have seen an average drop of 68% since 1970. https://livingplanet.panda.org/en-us/
WWF photo/Michael Owens

And now a global pandemic has laid waste to some of the pillars of the global economy bringing parts of it to an almost complete standstill. In doing so it has given rise to an intriguing question. If the coronavirus pandemic can unlock trillions from national exchequers to mitigate the worst economic, social and human impacts of the deadly disease, then why not a similar level of response to head off run away climate change or biodiversity extinction or any of the other environmental threats looming large?  After all, their consequences are likely to far outstrip the virus in terms of adverse impacts on human populations and on national and regional economies.

Questions like these raise the interesting prospect that investing in greener futures suddenly looks a lot brighter than it did even just a few short months ago. But it is by no means certain that the profundity of the intersecting crises now upon us has penetrated mainstream political thinking.  For that to happen, there has to be a much bolder recognition in mainstream politics that future economic development depends on well-functioning ecological systems and a continuing abundance of natural resources necessary to sustain life on earth.  This was of course the original vision foreseen in the framing of the US National Environmental Protection Act 50 years ago.  With hindsight, perhaps the utilitarian perspective on the environment foreseen in NEPA’s opening articles was not so far off the mark, at least given the predicament we find ourselves in now.

Anthony Long served as a legislative assistant in the US Congress as a Congressional Fellow of the American Political Science Association followed by political appointments in Oregon and New Mexico.  He later founded and led the World Wide Fund for Nature’s (WWF) European Policy Office in Brussels for 25 years.