A Year in the Life of a Livery Master

As I retired from being The Economist’s Diplomatic Editor, after 30 years covering the world outside the UK, if anyone had predicted that I would find myself lined up among the City of London’s Livery Masters, wearing the royal blue robes, gold chain and (when I really couldn’t squirm out of it) the Tudor bonnet of the Master of the Worshipful Company of World Traders, I would have thought them deranged. But my Master’s year that ended in October 2019 was both hard work and huge fun, and all in support of an institution even few Londoners know exists. 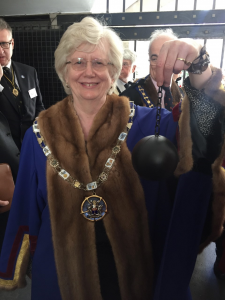 When invited to join World Traders, I knew little enough about the City itself, let alone the Livery, as today’s 110 Livery Companies in the Square Mile are collectively known. The attraction was two-fold: to get to know better parts of the city I had lived in for several decades in ignorance, and to play my small part in the great web of educational and charitable work that the Livery undertakes, year in and year out.

Livery Companies are not professional lobby groups. They do not take a view on matters of government policy (and that includes Brexit). They are, fundamentally, about giving back.

At last count, the Livery was donating collectively some £65 million a year to educational and charitable causes. By far the greatest flow of funds comes from the older, richer Companies with generous endowments: Goldsmiths, Grocers, Mercers, Vintners and their ilk. But a modestly significant chunk these days comes also from the modern companies, including World Traders.

The Livery is a rich mosaic. Each Company is different, not just in their longevity and the colours of their Master’s gown, but in the out-reach they cultivate and the charities they support. What all share, however, is a commitment to “longterm-ism” in the work they do. The contribution of the Livery to society (including in other cities around the UK that have Guilds and Livery Companies too) is not just a monetary one. Many Freeman (junior members of their Company) and Liverymen also give of their time and talents, as mentors, speakers in schools and colleges, governors, coaches for debating competitions, charity liaison officers and fund-raisers.

In an important sense, old or new, all today’s Livery Companies are the successors to the ancient Guilds—literally the butchers, bakers and candlestick-makers of their day—who set the standards for apprenticeships in their trades and who had the right to decide who could then ply that trade within the City, or be banished beyond its walls and bridges to set up in places like Clerkenwell or Southwark. Today’s companies still contribute what they can to upholding the integrity of their respective professions (though without those handy monopoly powers of earlier times).

As the centuries passed, some of the older companies lost contact with their former trades and clientele. Fan Makers nowadays cultivate a keen interest in the air-conditioning industry! Goldsmiths, however, still do what they always did, setting industry standards for apprenticeships and being involved in the assay work to determine the quality of gold.

The oldest and most prestigious of these companies are called collectively the Great Twelve, and play a special part to this day in the occasional pageantry of the City. Number one in precedence are the Mercers (Dick Whittington was a Mercer, though there is no record of his cat!). The Weavers hold the oldest extant royal charter, from 1155. But the Mercers had the most cash, and that bought them the top spot. Though people may know little of Livery history, if they occasionally find themselves at “sixes and sevens”, they owe that expression directly to the squabbling Merchant Taylors and Skinners. A deal eventually brokered between the two means they now alternate reasonably amicably in their precedence each year.

Supporting the Lord Mayor, the Sheriffs and the Civic City

All so picturesque and tradition-laced, but why the new lease on life, with the formation of the modern companies? The Master Mariners back in the 1920s were the first to break a couple-of-hundred-year moratorium on forming new Guilds and Liveries. Like their ancient counterparts, most of the 30-plus companies formed since then have organised themselves around a single profession: Actuaries, Engineers, Hackney Carriage Drivers, Information Technologists, International Bankers, Water Conservators–with Nurses, Entrepreneurs and Investment Managers lining up to make their transition from Guild to Livery too.

World Traders, formed as a Guild in the mid-1980s to refound an ancient trading fraternity centred at St Katherine’s Dock, became a Livery Company only in 2000—the first Company of the new millennium. We are the exception to the Livery’s one-trade rule. Our members are deliberately drawn from a wide variety of professional backgrounds—as traders of goods and services, financiers, but also diplomats, educators, lawyers, architects, medics and the occasional journalist. The linking thread is that all ply their trade or pursue their profession in part in the outside world.

World Traders are also part of the Financial Services Group of Livery Companies. Typically, the Lord Mayor spends 100 days of his or her year (only two of the 692 Lord Mayors so far have been women) travelling the world to promote the City as the premier financial and professional services hub. The 13 Companies of the FSG, including Chartered Accountants, Insurers, Management Consultants, Tax Advisors and others, offer background advice and research where they can. For example, a recent report helped support the Lord Mayor’s “Restoring Trust in the City” initiative.

Thoughts from the after-life…..

Like the Lord Mayor and their supporting Sheriffs, Livery Masters take office for one year only and the role is an honorary (ie unpaid) one. In World Traders, the Master chooses an overall theme–in my case “Trade and Geopolitics”–and rolls out a year’s-worth of related events for members. He or she (I was woman Master number six, with two more already in the pipeline) also represents the Company to the rest of the Livery, the City and beyond.

Over my 12 months in office, I donned my badge and sometimes my robes and chain over 230 times to represent the Company. But the role involves more than just turning up: there are black-tie dinners with speakers to arrange, along with business lunches, seminars, panel discussions, industry visits and in my case a five-day trip for a group of 35 World Traders to New York for a mixture of business and fun. Other responsibilities include fielding myriad emails from the Clerk (the administrator of the Company) before breakfast; occasional clothes-pressing at 2am, so as to be properly attired next day; hand-written thank yous sent without fail next morning (fountain pen will do, quill probably preferred!).

My stand-out memories as Master? Taking part, alongside the majority of other Livery Masters, in the solemn ceremony at St Paul’s, and for the first time also in the wreath-laying at the Royal Exchange, on the 100th  anniversary of the Armistice; being finger-printed, jailed and later bailed by my World Trader colleagues at the Tower of London, in full regalia and with the Warders gleefully whipping up the jeering crowds, all in charitable support of the Red Cross; getting to Canary Wharf well before dawn to wave off a 3-mile convoy of black cabs, one of them sponsored by World Traders, taking sick (sometimes terminally so) children, their carers and volunteer medical support teams to Disneyland Paris for the weekend. 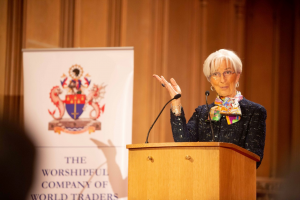 Christine Lagarde gives Tacitus Lecture at the Guildhall, February 2020. With thanks to Jake Sugden for the images.

The most memorable of my own events has to have been our Tacitus Lecture in late February at the Guildhall, for an invited audience of over 800 City folk and representatives of the schools, colleges and charities we support. It is the Master’s task to find the speaker, and then cross their fingers hoping they do not succumb to ‘flu, or break a leg skiing, before the big day. I was lucky enough to have Christine Lagarde (then Managing Director of the IMF, now head of the ECB) as my Tacitus speaker. She talked eloquently of the need for a more ethical, inclusive and sustainable finance industry, entertaining her audience with bookending thoughts about the villain – a banker, naturally – from the new Mary Poppins film that had just been released.

All in all, a frenetic year. But it was a rare privilege to serve as a Master of a most modern-minded Livery Company.