In 2003 The Harkness Fellows Association made a film about the experiences of Fellows over the years. This atmospheric video was created with a view to re-launching the Fellowships in the UK following the narrowing of focus in 1997. Later in 2003 Timothy Hornsby and William Plowden approached me as a fund-raising consultant to explore the possibilities of such a re-launch. Mission statements were composed, strategies written, partners sought, initiatives suggested and funders researched, but it soon became apparent that our funding base was too slim, and that the HFA qua charity was perceived as “too elitist” amongst the mass of needy charities, and besides, the world had changed, travel to the US was cheaper and easier and ‘the special relationship’ was not quite what it had been in the heyday of the Harkness Fellowships.

My role altered following the sad death of William Plowden in June 2010. I had already become a committee member and while Lesley Brown took over the role of Treasurer I took on another role that William had performed. I became the minutes secretary and adopted William’s elegant formatting and numbering system which has allowed me, very neatly, nine years later, to stand down following the hundredth meeting of the Harkness Fellows Association on 17th June 2019.

It was a great privilege to meet William, and indeed throughout all the activities of the Association, I have never ceased to be amazed by the fascinating, interesting and able people who are the alumni – some of whom were, of course, given their Fellowships after interviews with William. In the summer of 2011, whilst on a family visit to New York, I had an appointment with John Craig, the then Operations Officer at the Commonwealth Fund. It was a strange experience to visit the grand residence at 1 East 75 Street with its sumptuous furnishings and portraits of Edward and Anna. I was ushered into one of the huge rooms to meet the friendly and approachable John Craig. This meeting, I hope, helped to facilitate regular contact with Robin Osborn, the current Director of the Commonwealth Fund’s Health Policy and Practice Innovations Program.

There are so many event highlights but one or two are worth mentioning. It was exciting to share a table with Sir Paul Nurse, with Sir Colin Blakemore and Timothy Hornsby at Chelsea Arts Club following Paul Nurse’s revealing talk on New Ideas in Biology at the Science Museum in 2014, when Paul Nurse banged the table to emphasise that climate change was the most pressing concern facing our planet. 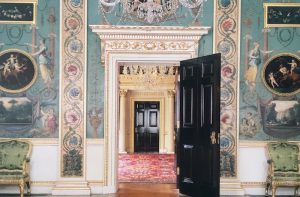 During the later years of my involvement with the HFA I began to organise a Summer Event – a visit to a place of cultural or artistic interest. In the summer of 2013 we went to HF Nigel Hall’s beautiful studio in the back streets of Balham. In later years we scrutinised Syon House, Eltham Palace, Kenwood and Spencer House. Then thanks to HF Bamber Gascoigne who unexpectedly inherited it, we were able to visit the newly re-opened West Horsley Place, a fantastic historic house and also the new home of Grange Park Opera.

It was a delight to meet Aminatta Forna – a breath of fresh air, who briefly became a committee member. It was wonderful to hear Nicola le Fanu talk about being a composer at an event held at Timothy’s house in Dulwich, with a piano. Every single Fellow had a story to tell, and at every single event it was inspirational and interesting to hear those stories, particularly from those who had travelled to America during the later sixties. It has been a pleasure to meet the assortment of friendly Fellows who regularly attend our events.

To ensure that the HFA continues to be relevant in today’s world it has been a priority to create an appealing, user-friendly, workable website so that event booking is easier, the remarkable histories of our alumni can be recorded for posterity, and a topical newsletter can be published on a biannual basis. This also allows current returning Fellows to remain in contact with our organisation as they develop their careers following their Fellowships from the Commonwealth Fund. Working on this with Judy Hargadon who led this initiative has been a great pleasure. None of this would have been possible without the leadership of the indomitable Timothy Hornsby, who has been Chairman throughout this period, nor the support of the ACU, through the reliable service currently provided by Helen Ullock, the staff member who supports the HFA.

So thank you, Harkness Fellows! I have really enjoyed working with you all these last sixteen years, and am only sorry that there is not space to mention more splendid people and brilliant events as well as those above.