In the unusually sweltering temperatures of summer 2018 we were pleased to meet on Sunday  8th July in the cool reception room of Spencer House for our tour around this unusual residence.  As you walk through Green Park before you branch off down the narrow alleyway that cuts across to St James’ Place, you see the backs of the large edifices lining the edge of the Park. 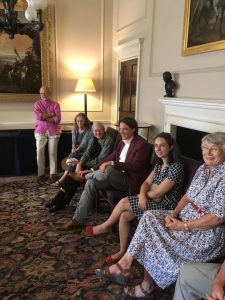 Spencer House stands out as the only building left in its original state, both inside and out, most of the other historic buildings long gone and replaced by unremarkable offices and flats. Thirteen of us were taken around by our guide Robin who dazzled us with his expertise on the history and restoration of the Spencer family’s town house built by John Vardy and James ‘Athenian’ Stuart between 1756 and 1766.

The house, built for John, first Earl Spencer, was lived in by successive Earls and Countesses Spencer with the purpose of entertaining London high society, until 1927 when it was stripped and abandoned and let to the Ladies Army and Navy Club who remained in occupation until 1943.  The valuable contents were packed up and taken to Althorp. Later during the war, in 1942, to protect it from the blitz as far as possible, valuable architectural features such as chimney-pieces and solid mahogany doors were also removed to Althorp. In 1985 RIT Capital Partners, the family company of Jacob Rothschild, bought a long lease on the property and Lord Rothschild embarked on a major restoration programme. His team of architects, designers, historians and carvers have restored the interior as far as possible to its original state, but nothing came back from Althorp, although access was given to restorers to enable perfect duplication of furniture and architectural features, particularly the chimney pieces. Everything now in the house was found from a different source, whether bought, borrowed or re-made, but there is one exception. A magnificent painting of King David by Guercino acquired in 1768 by Gavin Hamilton for John Spencer, the first Earl, originally hung in the Great Room. This painting was bought at Christie’s in 2010 for£5m by a private collector and lent to Spencer House where it hangs, amazingly, in its original position. No expense or artistry has been spared in the exquisite restoration, from the breath-taking real gold leaf on the plasterwork of the Palm Room, to the painstaking carving in Carrara marble of the chimney- piece in the Painted Room.  The research into paint colours, furniture, upholstery fabric, curtains, floor coverings has been thorough so that the interior in all its gilded splendour recreates this stunning building at its most sparkling. 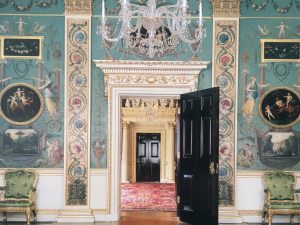 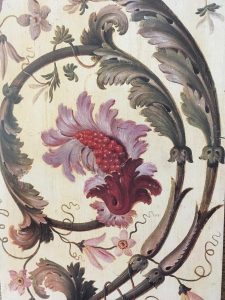 The only room that has remained with its original artwork is the Painted Room, the last room you see as you tour the house, where the creativity and originality of James ‘Athenian’ Stuart is seen in the pioneering neoclassical wall paintings and decoration of this unusual room. Our guide was not allowed to tell us the total cost of the restoration which must have been eye-watering.