Sir Terry Farrell Harkness Fellow is a prominent voice in British architectural planning, with a strong reputation for contextual urban design schemes, as well as exuberant works of post-modernism such as the M16 building. He has an international practice, and in Shenzen his firm was responsible for the tallest building ever designed by a British architect, and the largest railway station in Asia. In 2013 his firm produced a major Review of Architecture. He lectures at a number of different universities, including Cambridge and the University of Pennsylvania. He has been responsible for a number of regeneration projects, including the Thames Gateway, Europe’s largest regeneration project. He advises the Mayor of London. This year Sir Terry became a recipient of the Royal Town Planning Institute Gold Medal. This is the highest accolade in urban planning, recognised internationally with previous recipients including Sir Patrick Abercrombie, Lewis Mumford and Sir Peter Hall. 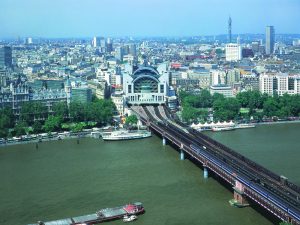 “My time as a Harkness Fellow transformed me and made me equal to others,” Sir Terry Farrell (HF 1962) told attendees at the Harkness Fellows Annual Lecture in November 2017.

Farrell described himself as an average student brought up on a council estate, and how two important breaks as a youngster spurred him on. First, through the post war meritocracy he got into grammar school. Secondly, on his art teacher’s suggestion he entered a regional architecture competition aged 16, which he won. Having identified his inspiration from that point he was driven hard to succeed and focused almost exclusively on work as he completed school and then his degree at Newcastle School of Architecture.

On leaving he was employed by the LCC working on a ventilation building for the Blackwall Tunnel. Realising he would need to do something dramatic to make his career interesting, he applied for a Harkness Fellowship in 1962. Successful, he travelled to the USA on the Queen Mary with other Fellows from his year, though he noted that only two of them travelled ‘in the bows’. He was located in Philadelphia. Somewhat exhausted from school earlier and university study he “absorbed everything but the course”. Instead he read and drew and travelled, exploring particularly buildings by renowned architect Frank Lloyd Wright. In those days he could just knock on the door of private homes designed by the architect and be welcomed in to look around. Terry realised at this point that he was now privileged and this gave him confidence to set up his own business on his return. At the end of his fellowship, he acquired another scholarship to visit the Far East and Hong Kong, starting a career-long relationship with that country. 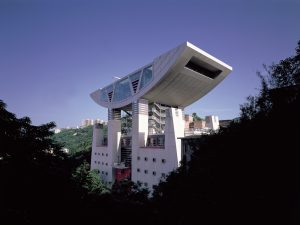 In 1965, he set up a partnership with Nicholas Grimshaw when both were just under 30. So young were they that clients assumed they were working in their fathers’ practice. Then some 15 years later he set up his own firm, Farrells. Fame, fortune and hard work followed; he first became well known as the architect of the MI6 building on the Thames, although of course at the time they did not know exactly how government planned to use this building. The internal ‘kitting out’ was undertaken subsequently by the government. Shown in the Bond films, this building gave them more than professional recognition; they became what Sir Terry refers to as the phenomenon of “signature architects, with an element of celebrity status”. This opened doors internationally for him. Incidentally, MI6 found it opened doors for them too; they had been wondering how to ‘come out’ and be more visible – the building did it!

Sir Terry has worked in Hong Kong ever since his early visit and shared some interesting then and now photos of the radically changed skyline, including his own famous Peak Tower. As well as in the UK, his company now have offices in Hong Kong, Singapore, Sidney and Shanghai – though he noted that for work designed in China, the commissioned architect only does the front of the building – local architects completing the rest.

However, he stressed in his presentation that he is not only interested in high end publicly impressive buildings. He was active in the Pop Art moment, designing the TVAM building for breakfast television in 1981. He is interested in “architecture for the common man”, in how buildings impact on the community. He designed the Home Office building in Marsham Street with multi-coloured panels. Functional and decorative, it brings colour and interest to the front walkways and pavements as the light changes. He talked of “low style architecture, big style urban design”, the latter essential to well functioning communities. In 2013 he produced a report for government on improving the everyday built environment and takes every opportunity he can to pursue this passion. More recently he has campaigned to reverse the one-way system set up on Pall Mall, successfully, and is now challenging plans for Tottenham Court Road. He strives to alter the mind-set that large one way systems in cities create, to a more community-based one. He focuses on making it easy to walk in cities and raises issues about the design of public space, asking his audience, “Who owns Marylebone Road? Who controls its overall look with its many owners along the sides of the road?”

With that challenge he left us wondering why all architects don’t focus on the community as well as their signature buildings.