Origins of the Royal Academy of Arts – John Entwistle OBE

As you walk down the smart new staircase from the Piccadilly entrance of the Royal Academy of Arts through the cast corridor to the Schools, you pass the écorché sculptures on your left, and a larger-than-life antique plaster cast on your right, and then you take a left turn down a corridor

and turn right and enter the old Life Drawing Room of the Royal Academy Schools.  This historic room has not been touched in the latest round of renovations (it is next in line) – high glazed windows, old inefficient black radiators, ancient benches ranged in a shallow horseshoe around a vast curtained-off mirror, in front of which the models would take their position.  It was here that 25 Fellows and their guests met on a warm Sunday morning in July to hear John Entwistle’s talk, with the help of some telling illustrations, on the origins of the Royal Academy, and how this famous institution and its post-graduate teaching school, known as The Schools, came into being. 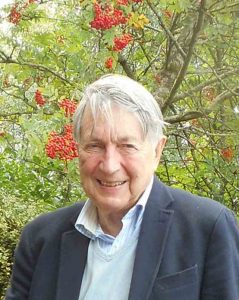 John Entwistle, Emeritus Trustee of the Royal Academy Development Trust and former Chairman of Patrons of the RA Schools, is a keen supporter of the Royal Academy.  A water-colourist in his own right he is also a keen collector of contemporary art, and well placed to tell us this interesting story.

John told us that by the beginning of the eighteenth century artists’ societies were being set up throughout Britain normally involving much drinking, dining and discussion alongside some life drawing classes.  In 1711 Sir Godfrey Kneller set up an academy of painting in Covent Garden where you could do life drawing for a guinea a year. Rival academies sprang up including William Hogarth’s academy in St Martin’s Lane which was run without patronage by the artists themselves.  Several academies followed, the most influential with an eye on European models, until in 1768 a collection of leading artists and architects planned to obtain the support of the King to try to raise the status of art and establish it as an intellectual pursuit in this country.  George III was won over and on 10 December 1769 the King signed the Instrument of the Foundation of The Royal Academy of Arts. Eventually Sir Joshua Reynolds was persuaded, perhaps with the promise of a knighthood, to become its first President. Thus began the illustrious history of this institution with its ranks of notable artists such as JMW Turner and John Constable. It was interesting to hear that the organisation that was then founded is largely the same as that which operates today, except perhaps that the RA Schools is now a post-graduate art school, with no tutorial fees, providing up to 50 much sought after places for its three year course. The somewhat fusty image of the RA has been well and truly thrown off with tutors including  artists such as Michael Landy, Piers Gough, Humphrey Ocean, Eileen Cooper and Tracy Emin. 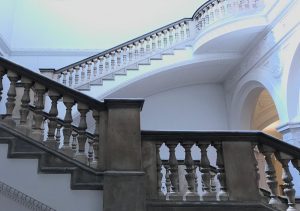 entrance where we were able to see several of the paintings John had referred to, and of course, the great Michaelangelo Tondo now in its magnificent new location in these galleries.  Our visit was concluded with a pleasant lunch in one of the RA eating areas.

At the beginning, John reminded us that Dr Samuel Johnson wrote critically of a popular, pre-RA exhibition held in 1760 in the Great Room at the Society of Arts off the Strand. “Last year’s exhibition was crowded,” he wrote, “ and incommoded by the intrusion of great numbers whose stations and education made them no proper judges of statuary or painting, and who were made idle and tumultuous by the opportunity of a show.” Walking through the throng in this year’s Summer Exhibition, we can raise our eyebrows at how times have changed, and for once, that things have changed for the better.

We would like to thank Eliza Bonham Carter, Keeper of the Royal Academy, for giving us pro bono access to the Life Drawing Room, and Joana Rodrigues for her technical help and support on the day of the visit.  See more about the Royal Academy here.