Living Longer; a Blessing or a Curse? Dr Anna Dixon

Dr Anna Dixon (HF 2005-6) is Chief Executive of Ageing Better, a charitable foundation working to change society so more people can enjoy later life. She came to this post from her role as Director of Strategy and Chief Analyst for the Department of Health and prior to that was Director of Policy at the King’s Fund, an influential think tank on health and social care.

Many of us underestimate how long we will live. Perhaps we focus on those we know, our parents and grandparents and use the age at which they died as a guide to how long we might live. Or perhaps it’s because the changes have been so rapid, our perceptions have not kept up with reality. Someone born in 1914 had just a one percent chance of reaching 100. But a child under 10 today has over a 50% chance of making it to 100. According to ONS there were 3,000 centenarians in 1983 rising to 14,500 in 2016. So the challenge is not just what we do to enhance the quality of our own likely extended life, but how society needs to change to accommodate this.

Although there are signs that the gains in life expectancy are slowing down due to lifestyle diseases, growing inequalities and austerity, there is little denying we are going to live longer than previous generations, a good thing if those extra years are lived well. To date we have not paid enough attention to quality of life. This is the focus of the Centre for Ageing Better.

Set up 3 years ago, Aging Better is using and commissioning research to stimulate and enable government (national and local), businesses, voluntary organisations, communities and individuals to change behaviours and systems to enhance the quality of later life.

Extended life has many opportunities.  Many of us complain we don’t have enough time for all the things we want to do: increased life expectancy offers this though we may need to restructure our time. Andrew Scott and Linda Gratton, in their book The 100 Year Life argue that we need to completely rethink our model of a 3 stage life – -educate, work, retire.

Our research found that the ingredients of a good later life are health, financial security, social relationships and purpose. We know that if we look at wellbeing scores including happiness and life satisfaction, there is a U shaped curve. We get happier as we get older. The trough of gloom is at about age 45. There is also a drop off again after the age of 70 in men and later for women, perhaps coinciding with a period of dependency as people approach end of life. 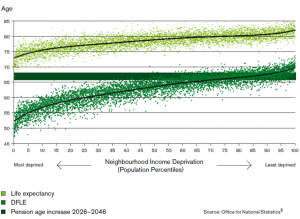 An overwhelming challenge though is ageist attitudes.  A first step in improving old age for all is to challenge ageism as a bad thing.
Seeing old age as positive can be difficult in the face of so many images and messages that tell us that old age is a period of decline. Have you ever tried looking for a birthday card for an older friend or relative which doesn’t make jokes at their expense? Likewise, the high profile that dementia has had in recent years is positive in building awareness and in getting more funding for research and treatments, but it has almost become synonymous with old age. There are other stereotypes of old age;  TV programmes that have exposed scandals in care homes distorting our opinions of social care, and fundraising appeals featuring lonely old men, to pull at the heart strings. In fact, data show older people are no more likely to report being lonely than younger people.
Ageism is real: it plays out with people not getting jobs because they’re perceived to be too old. By the year before people reach State Pension age, over half are no longer in work. While for some people this is a positive choice, an estimated 1 million people aged 50-64 want to be working but are not. The main reasons for this are involuntary redundancy, health conditions and caring responsibilities.
Ageism affects health. A positive perception of age is shown to be good for health and to length of life. People with positive self-perceptions of ageing live on average 7.5 years longer than those with negative self-perceptions.

If more of us are to enjoy later life and make the most of the extra years, we need to make radical changes as a society and as individuals in four key areas.

Aging Better wants to increase by 5 years disability free life expectancy and reduce the gap between the richest and poorest. This will require a focus on prevention at national policy and local level, a boost to physical activity levels, both cardiovascular and strength/balance, and changes to health behaviours.

Ensure that homes are safe, accessible and affordable

Since the vast majority (over 90%) of older adults live in mainstream housing, and that is also where most people wish to stay as they grow older, we want to increase the supply of affordable and accessible homes, with mandatory standards, and improve the condition of existing housing stock so that homes are adapted to meet people’s needs as they age. Enabling more older people to stay well and remain independent in their own homes for longer reduces the demand for health and social care.

We want to close the employment gap between different age groups. Through our research we have identified 5 areas for action by employers : flexibility, including carers leave; age positive recruitment; managing age diverse teams; supporting people with health conditions to remain in work; and supporting training and progression. We are also developing and testing new approaches to employment support for older job seekers.

Create communities that are age-friendly where people can be active and connected to others.

We want to shape the built environment and social infrastructure in communities so that people are able to get out and about, connect with other people and participate and feel included in their communities.

What can the audience do? 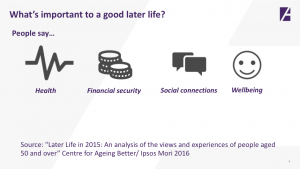 Members of the audience  – whatever their current age – have a role to play as policy makers, employers, community leaders and indeed as individuals. Most of us live in a permanent state of denial. We don’t think we’re old.  Old is always older than us. It’s time to address these issues.

Keep working and help others to keep working, but keep it purposeful and flexible.

Save more – even with pension auto-enrollment we need to save more and help others to do so. 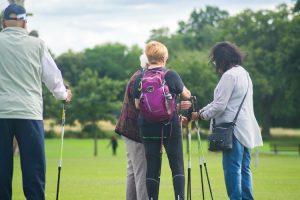 Lose weight:  33.3 million people in the UK are overweight and it does take more conscious effort as we age, as the metabolism slows.

Connect to others and do things you enjoy.

Share the love –Volunteering, or contributing in other ways to the community you live in.

Be creative Your time in later life will be a great gift – so cultivate yourself, your creativity, your hobbies.

Know your place  – your home and community  – and make it fit for purpose if you want to stay there.

Last, but very much not least, be positive – a negative attitude to growing old could actually take years off your life.

This extra time can be seen as a gift. What are you going to do to make the most of it?

For further Information go to www.ageing-better.org.uk