Can we deliver Sustainable Food Production? 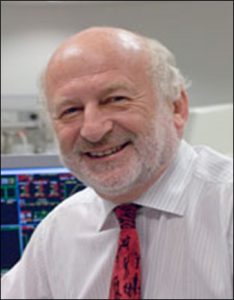 Professor John Pickett joined the University of Cardiff’s School of Chemistry programme on sustainable agriculture in 2017 from Rothamsted.  Rothamsted Research is one of the oldest agricultural research institutions in the world having been founded in 1843.  John’s work at Rothamsted was referenced in the Royal Society’s landmark study in this field, “Reaping the benefits: Science and the sustainable intensification of global agriculture”, published in 2009. (See below for publications refenced during John’s presentation.)

This report, chaired by Sir David Baulcombe FRS and including experts on agriculture, international development, conservation biology and plant science, examined the contribution of the biological sciences to food crop production.   They reported that food security is one of this century’s key global challenges. Producing enough food for the increasing global population must be done in the face of changing consumption patterns, the impacts of climate change and the growing scarcity of water and land. Crop production methods must also sustain the environment, preserve natural resources and support livelihoods of farmers and rural populations around the world. The report discusses the need for a sustainable intensification of global agriculture in which yields are increased without adverse environmental impact and without the cultivation of more land.

John gave his audience a whistle-stop tour of the key work taking place within his field to address food security and sustainability.  During his talk he highlighted concerns about the lack of scientific research in this area and the need for scientists to communicate their work better for the general public to understand. 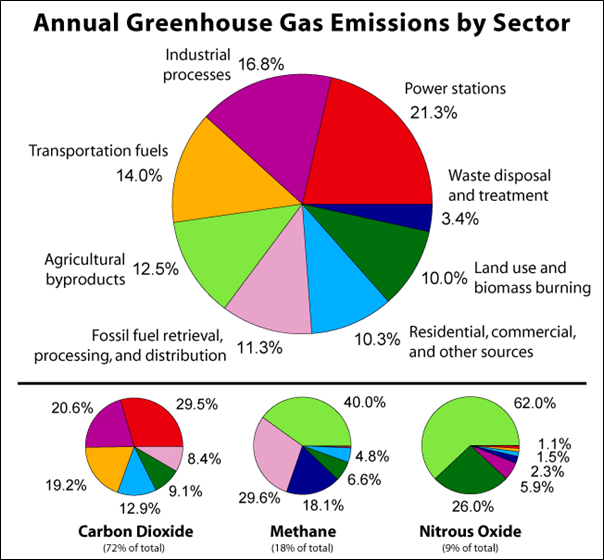 However, sustainable food sourcing is about more than reducing global warning.  It is about increasing the efficiency of farming methods in ways that do not damage the soil and about increasing the natural defences that plants have to resist disease.  Knowledge of how plants communicate with, and support, fellow plants has been a growing area of understanding and development in John’s field.

Professor Pickett touched on many initiatives and research including the following:-

The 20: 20 Wheat project.  Led by Rothamsted, the goal of this project is to generate the necessary science and technology for the development of wheat germplasm and agronomic practices which are capable of yielding 20 tonnes of wheat per hectare in 20 years’ time. Wheat currently provides over 20% of the world’s calories for human consumption, and further pressure on wheat production and its eventual price as a commodity may also result from demands for bioenergy. The current average farm yield of wheat in the UK is only 8.4 tonnes per ha and since 1980 wheat yields have only increased by about one-third, whereas maize yields have increased by more than 50%. Building on the expertise at Rothamsted Research, this strategic theme will be delivered through four programmes; maximizing yield potential; protecting yield potential; determining soil resource interactions; and using systems approaches to crop improvement.

Nitrous Oxide reduction.   62% of the nitrous oxide contribution to greenhouse gas is an agricultural by product.  John explained the Haber-Bosch process of producing fixed nitrogen from the air as a fertiliser.  There are projects to improve this, reducing the waste in the current process for producing nitrogen.  There is also work to reduce demand. Current research by Peter Shewry, unpublished, is focused on increasing the uptake of nitrogen by wheat plants.  Current varieties only take up about 80% of applied Nitrogen (less at higher applications), with Nitrogen harvest indices of 80-90%. Unless these efficiencies can be improved, the Nitrogen fertiliser requirement for “20 tonne wheat” would be 650-700 kg per ha. 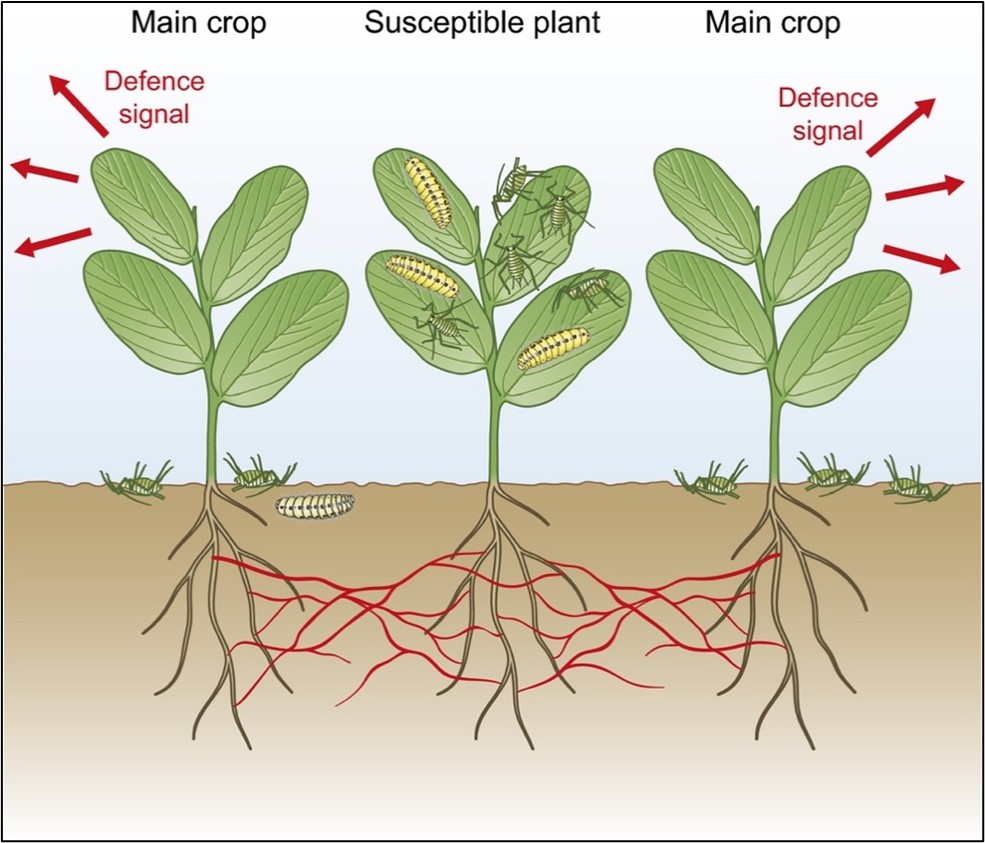 Plant signalling. In John’s view, for sustainable food production, arable agriculture must transform to perennial cropping. This will require smart GM plant signalling to optimize farm inputs. A number of projects working on this were outlined.  Published in 2016, his work showed how sensitive ‘sentinel’ plants detect a problem e.g. pests, diseases, weed competition and depleted nutrients and water, or even an opportunity, such as excess nutrients and water, and signal to the main crop of ‘smart’ plants. Their GM-enhanced response to volatile signal compounds are linked to gene expression of GM traits that then deal with the problem or opportunity.  Working with industry, Huw Jones from the University of Aberystwyth, is using molecular genetics to design sentinel plants for detecting biotic stress.

Understanding Pheromones; Key to all this work is a better understanding of pheromones.  Initially recognised as a substance secreted and released by an animal for detection and response by another of same species, research now shows that plants operate in the same way. Using coupled gas chromatography-electrophysiology scientists are able to analyse the chemical make-up of many more pheromones for such developments.

Building on this work, four new populations of transgenic wheat lines have been generated (2012) for field testing. Work such as this can be funded by the Biotechnology and Biological Sciences Research Council, part of UK Research and Innovation, a non-departmental public body, and the largest UK public funder of non-medical bioscience. It predominantly funds scientific research institutes and university research departments in the UK. However, John highlighted the importance of private sector funding in much of this research as trials are costly and made increasingly so by public misunderstanding. This particular research programme was affected by a campaign; a mass action against genetically modified wheat. For new commercial development of these technologies John collaborates particularly with Dr Owen Jones (Lisk and Jones Consultants, Cardiff).

Reducing damage by Aphids John referred to the importance of work to reduce the damage of some aphids, highlighting a recent publication led by Li et al.

Noting how serious and rapid the depletion of fossil fuels has been John highlighted that work in land sparing from agriculture can create more opportunities for carbon capture and help offset greenhouse gas emissions from agriculture.   Plant volatile‐mediated signalling via the rhizosphere and its application in agriculture is now being applied to carbon sequestration by trees. 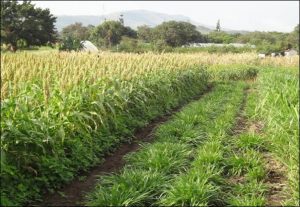 John is currently involved in a piece of work entitled ‘Achieving food security for one million sub-Saharan African poor through push-pull innovation’ with a focus on reducing the impact of the Fall Armyworm.  This is supported by icipe, the International Centre of Insect Physiology and Ecology, an international scientific research institute, headquartered in Nairobi, Kenya that works towards improving lives and livelihoods of people in Africa.

Finally, John considered the issue of Welsh Black grazing on Welsh pasture creating methane.  He explained how cellulose is digested by ruminants.  In work led by Jamie Newbold of Scotland’s Rural College in Edinburgh, there are positive signs that genetic modification of the microbes that produce the methane during this process can lead to reductions in emissions.

This is clearly a field of scientific research that we should all be watching carefully in the next few years.

About the speaker – Professor John Pickett is an expert in research underpinning the move towards sustainable food production. His contributions to the field have been acknowledged with the 1995 Rank Prize for Nutrition and Crop Husbandry, election to Fellowship of the Royal Society in 1996, election to Membership of the Deutsche Akademie der Naturforscher Leopoldina in 2001. John was appointed to CBE for Services to Biological Chemistry in 2004. In 2008 he was jointly awarded the Wolf Foundation Prize in Agriculture. He presented the Royal Society’s premier lecture in the biological sciences, the Croonian Prize Lecture in 2008, and the Cornell University Lecture in 2009. He was elected International Member of the National Academy of Sciences in 2014. In August 2017, he gave the Sterling B Hendricks Memorial Prize Lecture at the 254th Meeting of the American Chemical Society, Washington DC. In 2020, John was elected Fellow of the Learned Society of Wales.   https://www.cardiff.ac.uk/people/view/521655-pickett-john

Publications referenced during the talk.