Dame Frances Cairncross is a British economist and respected journalist who in 2018 was appointed by the government to lead an independent review into the future of British journalism. Educated at St Anne’s College, Oxford and Brown University in the USA, she spent over 30 years working for a number of publications, most notably The Guardian (1973-1984) and The Economist (1984-2004). In 2004 Cairncross was appointed Rector of Exeter College, Oxford, where she remained for ten years. She was made a Dame of the British (DBE) in the Queen’s Birthday Honours list for services to education in June 2015.

The Cairncross Review: a sustainable future for journalism was published in February 2019 and focused on how to sustain the provision of high-quality news. It had been set up at the request of local MPs who realised the impact on local politics and democracy of the loss of local papers, which were becoming financially unsustainable and closing. 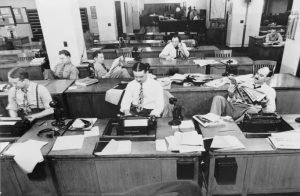 News groups have been experiencing two significant trends.  There has been a huge shift of advertising from print to digital; from paper pounds to digital pennies.  On line advertising is cheaper and is superior in its ability to target customers, through the extensive knowledge acquired about each of us by digital platforms. In 2018 the UK had the highest on line ad spend as a share of GDP.  Advertising revenue overall is dwindling. It was formerly a major source of income for all papers, and is nowhere near replaced by any other sources of income.  The second significant trend is that news readership is sinking, even when people do not pay. Both these trends are also affecting TV, but at a slower rate.

“Google and Facebook are the largest platforms by far, with over a third of UK internet users’ time online spent on their sites. …. Google has more than a 90% share of the £7.3 billion search advertising market in UK, while Facebook has over 50% of the £5.5 billion display advertising market.”  (CMA Digital Markets Strategy, published in July 2020)  “Google and Facebook also increasingly control the distribution of publishers’ content online” and as a consequence “these platforms can impose terms on publishers without needing to consult or negotiate with them”. Protected by strong network effects, economies of scale and unmatchable access to user data, these platforms dominate. The resulting  weak competition in search and social media means that more data is given up, there is less competition in digital advertising and less investment in content by news organisations

The second trend is falling readership, especially amongst the young. The classic image of the commuter reading his or her paper is now transformed to this.  Mobile readers now account for most readers and most adverts.

Why does the loss of local and regional papers matter?  The Review highlighted that written journalism, (whether in print or on line) originates the largest quantity of original journalism and is most at risk – particularly investigative journalism and democracy reporting.  Local papers were where journalists got their ‘on the job’ training.  Dame Frances noted how hard it had been in recent years to give career advice to her students at Exeter College, Oxford,  who wanted to become journalists.  High quality investigative journalism is essential, given that half of UK adults worry about fake news or disinformation.

News increasingly comes to us for free on line. The main news website, the BBC, is free.  Many now do not see the need to pay for news content.

The Review made proposals  about actions that could improve the outlook for high quality journalism and 18 months after its publication, Dame Frances highlighted areas that give us hope.  We live in a period of extraordinary disruption with many start-ups challenging the way things were.  Digital media offers new approaches to news with new developments such as Tortoise,  Politico or New York Times on line. Online news cuts costs; the Independent is said to have been in profit since ending printing. High quality online news is available to anyone with internet access. She also noted that digital media offers new ways to hold politicians to account, for example, Twitter.  There are growing signs that people will pay sometimes, for example Audible, run by Amazon.  This may be for a premium service, for example Spotify Premium.  The Times (and ST) charge £15 a month subscription for full access.

A key question considered by the Cairncross Review was ‘Should the government intervene?’   Is the media just a market like any other, such as department stores or private cabs?   Or is it different?

Dame Frances outlined two grounds on which the media might be considered different.

Is there an antitrust issue; is the advertising market fair? And is some news in the public interest and therefore essential for good governance?

With regard to antitrust issues, she was delighted to confirm that the CMA Digital Markets Strategy has paid particular attention to the relationship between digital advertising and news publishing. It calls for an enforceable Code of Conduct, backed by a body empowered to make its recommendations stick. It sets the goals of increased competition, fair trading, transparency, and more consumer control over data; and made recommendations like hers, to use negotiation as far as possible but back it with legislation.

On the question of whether some news is a public good, and therefore that it merits public support to produce, Dame Frances promotes the view that some news is indeed a public good, privately provided. Good government needs professional reporting, and other news can be used to attract attention to news that is in the public interest.  This justifies a subsidy, but raises questions about how to administer. Should it be tacked on to the licence fee, or a Government grant, or in the form of tax-free charitable status?   Her Review had recommended a Public Interest News Federation, similar in role to the Arts Council, but the government had promptly turned down this recommendation.

Other countries are also concerned about the power of the platforms and the way it affects journalism.  Australia is in a fight with Google over the ACCC proposed News Media Bargaining Code; in the EU there are anti-trust investigations, and the Germans and Spanish have in the recent past tried and failed to get Google to pay for news snippets. The US House Subcommittee on Antitrust has criticised digital giants and Trump’s Attorney General just filed an antitrust suit against Google search.

The power is not balanced – it is almost a global game of chicken. If Google doesn’t run “snippets”, publishers lose ‘eyeballs’. Although Google News Showcase is beginning to pay for news within news partnerships , there is still no pay for content that appears in Google Search. Their level of control also means that for example, if Johnson resigns, Google decides if the story goes in Search or the News Showcase………..

In addressing these challenges, Dame Frances called for the UK to work with other countries, such as the US and Australia, to negotiate a better settlement with Google & Facebook. We must find ways to channel financial support to public interest journalism, at arm’s length, especially independent local news.  We must encourage imagination, innovation and investment in developing online media.  She opened the session to questions noting that there are trade-offs to be made and urging her audience to read the CMA report.