Which would you think is the more daunting job, Deputy Director at the Tate or Chief Executive of the Royal Opera House?

Which would you think is the most daunting job: Deputy Director at the Tate or Chief Executive of the Royal Opera House? Alex Beard, who has held both posts, suggested to Management Today that it was the Opera House: “This is a very ‘peopley’ job. This means that many things can go wrong, which gives it a singular daily frisson. The thing that can happen to the Tate is that some pictures might get nicked. Which they did once when we lost two Turners at an exhibition in Germany. We got them back eventually but it took 10 years.”

He made his name at the Tate, where its director Nick Serota, asked him to assess three possible London sites to expand the institution. He chose the most intimidating, the Bankside Power station on the Thames.

This was accepted and Beard given the responsibility for supervising the project. The Tate went from an organisation of 330 people where 85% of the finance came from the government to 1,000 employees where the government provided only 32% of the costs. But what Tate Modern did provide was a huge increase in visitors. Some five million in its first year.

It was at the Tate that Beard recognised the era of generous public subsidies to the arts was coming to an end. Together with Serota he took to the American road of fund raising concentrating on wealthy philanthropic donors and corporates. Beard openly admits he is fond of fund-raising and has won a reputation as one of the cleverest and most persuasive of fundraisers in the field. He has even advised the Department of Culture, Media and Sport on the potential that philanthropy offers. 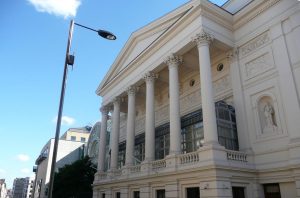 This skill must have been a big factor in winning his Royal Opera job when Tony Hall announced he was leaving in early 2013 to run the BBC. Before Hall the Opera House had been in turmoil losing five directors in five years. Beard inherited a much more stable institution.

Ironically although best known for his role at the Tate, Beard’s first love had always been opera. He was taken to the Upper Slips by his mother at the age of 11 and became a board member of Glyndebourne Opera in 2008. So he was not unfamiliar with the challenge when he reached Covent Garden five years later. He told us: “I am not a polymath. I’m a magpie. I once plucked a cello, try to use my bike to get to work, and am a member of a cricket club. I do not set targets but do set a direction of travel. You need a steely nerve and a vigilant eye on finance. My principle job is to look out for people with skills. One aim is to create a new work in every season.”

He said he loved the job: “Day after day we get 300 people to do something which is almost impossible: 100 below the stage (orchestra), 100 on the stage and 50 backstage.”

Widening as well as increasing audiences

He thought the organisation was in a reasonable state but there were serious challenges ahead. The New York Met has been the first opera house to broadcast its programmes in the 1930s and the first to use cinemas to widen its audience. The ROH had followed suit with cinemas in the last decade. Last year 740,000 people attended theatre performances, another 740,000 watched the operas and ballets in 478 UK cinemas, and further thousands in cinemas of 48 overseas cinemas. Last year Covent Garden performances achieved an occupanacy of 96%, an attendance rate only exceeded by the Vienna Opera House. It involved 41 shows delivering 500 performances, the most intensely used
theatre in Europe.

Audiences had widened as well as increased. Cinemas were offered six operas and six ballets a year. The theatre was not just open for the rich – 50% of audiences earned less than £40,000 and 40% were under 35. Theatre prices were half the rate of the Met’s: 50% at or below £50; 40% at £40 or less, special offers for students.

The company was lucky in having a theatre in the centre of the city to attract tourists. It had another large building in Thurrock, near to the Thames Gateway, where all the sets are built and most of the costumes designed and created.

Beard was unequivocal that even with reduced public subsidies the company still had an accountability to its audiences. This ranged from improving conditions within the theatre , organising more lectures on forthcoming events, and widening outreach programmes to local schools. On the latter he noted “We should do our bit to help ensure every child has access to our culture.” He is in talks with the Women’s Institute with respect to encouraging more group visits. Some of this was already underway in the years before he became CEO. It now includes workshops in schools, formal apprenticeships in backstage work and set building; community and participatory projects that led to 30,000 people attending performances along with 20,000 more through targeted schemes for families, students and isolated older people.

He went out of his way to express admiration for the talent in the ballet corp, noting two exceptional dancers with ‘muscular skeletons’ and an ability to dance like ‘liquid mercury’. The company is in touch with China, through its embassy, to act as an advisory body for the 32 new ballet companies being created there.

Finally on finance he recognised the growing number of older people in society would require more funding from health, social care and pension departments. His fund-raising skills are being heavily engaged on three to four nights a week with potential donors in excellent seats and dining between acts. It is not helping his waist line, but in his words ‘public funding
is so last century’.